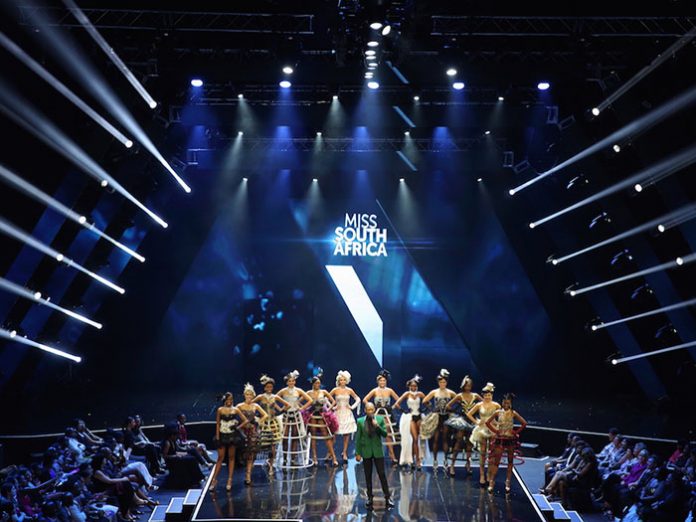 The 2016 Miss South Africa was staged at Carnival City, Johannesburg, with this year’s theme having a robust feel as lighting and creative designer, Joshua Cutts, made use of negative space and aimed to create a production that had the distinct flavour of a music awards event. With the winning formula of the previous year’s beauty pageant, the same technical team were contracted for the second consecutive year to ensure a dream occasion.

Sun International contracted Sic Entertainment to produce the televised show, which in turn brought in Dream Sets to cater for the technical, and Visual Frontier for the design. It was the same team with the same name. Gavin Wratten (Sic), Eben Peltz (Dream Sets) and Joshua Cutts (Visual Frontier) doing what they do best.

The surreal and massive opening saw flames and actors on stage in a “dark circus” type carnival, the Miss SA contestants gracing the ramp, adorned in dramatic designed apparel.
The lighting then transformed to a classical look, the audience captivated this time by clean lines with a minimalistic feel.
The event took careful planning. “We had teams working 24 hours a days for six days because of the tight deadlines,” said Joshua Cutts. “Eben Peltz’ role is to make sure that everything comes together technically and he is remarkable. We had less time than last year to create a bigger show than last year.”
The venue moved from Sun City to Carnival City, a slightly smaller venue but with a whole new set of challenges. Eben Peltz said: “We needed to pull in a much bigger team than usual to complete the set-up within the time available, as we had two days less than usual to get everything done.

A new challenge in this venue was building the tiered seating stands, which flanked the stage and ramps. This is a huge project on it’s own and had to be done at the same time as the set was going up.
“It was awesome to watch the team in action, no task was too big and our guys had to put in long hours. It was all worth it in the end and we are very proud of what we achieved,” said Peltz.
The Arena at Carnival City worked out well for this type of show. Everything was more connected, making it an intimate experience for those attending.
“Gavin Ratten liked the idea of multiple arches with LED above the stage to create depth,” explained Cutts. “And we had a large LED wall with two doors. This made it appear as if the contestants were walking out of the LED Screen and onto the ramp.”

With last year’s fashion show type feel working well, the team kept with the ramp. However, this time Johsua Cutts, who was also the set designer, included two ramps on either side of the main walkway, left and right, which meant models could continue walking without turning around to return to the back stage area. “Close friends and family of the contestants were seated between the ramps in the inner circle, something which we didn’t do last year,” said Joshua.
For the swimsuit category, each contestant was projected onto a water curtain. As the water curtain opened, it revealed the actual contestant standing behind the curtain. “LaserX provided the water curtain for us which was controlled by the MA Lighting grandMA2 lighting desk, and which we also used to switch the water on and off with. It was a great idea and it actually worked. We were worried about projecting onto water but we got enough brightness with two 20K projectors which we piggybacked on the curtain.”
Cutts wanted something that would create a music awards feel, hence the layers of LED screens with layers of lighting in-between. “I was chuffed,” said Cutts. “It gave a young and energetic feel. We had lots of negative space, but we aimed to create negative space that worked for us instead of against us.”

He also had a fantastic lighting rig at his disposal. “The Robe BMFLs for me are one of cleanest profiles on the market and assisted in creating a very textured backlight and perfectly colour corrected key light,” said Cutts.

He added: “The Clay Paky Mythos’ role were their strong beams which I needed to cut through the negative space and they did their job perfectly.”
To top it all off, the show included top entertainment by Prime Circle, Mi Casa, Sketchy Bongo and Shekhinah and was hosted by MC / Speaker ProVerb.