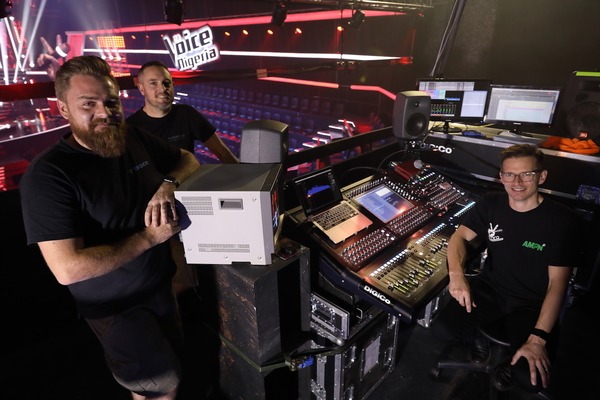 South-African based Multi-Media Event Trading has purchased 2 DiGiCo SD10 consoles from DWR Distribution, accompanied by 2 SD Racks on HMA Optics, Wave Servers, Orange Box and option cards, all of which will be used for the production of The Voice, Nigeria.

“I was working in the UK with Capital Sound as a freelancer and DiGiCo was the thing. The moment I mentioned anything else, someone would want to hit me over the head! Since then I’ve known it’s a premium brand and the preference for serious people in the know,” recollected Multi-Media Event Training’s Adriaan van der Walt.

“DiGiCo is an amazing system because you can design it, lay it out, and work with it in a way that suits your train of thought. On the run of The Voice, I completely reordered the layout of the console so that I wouldn’t be caught up in button presses to mix the show. I can mix the show in one state, and with a push of a button, the console populates the layout into the next state I need. I know where I am the entire show without having to try to find what I’m looking for. I find this rather impressive that I can achieve this over 36 faders especially being quite a complex show. That’s the beauty of a DiGiCo, it’s so configurable once you understand where to look for what you need. With help from Kyle Robson from DWR, it was possible to do that,” van der Walt added.

“Traditionally there was only one house that stocked DiGiCo and the brand is now slowly starting to spread,” commented van der Walt. “Having the SD10s puts us in a different league compared to a month ago, and the audio boys in the industry will look at our company in a new way.” Kyle Robson from DWR, concluded: “I think it’s very exciting to actually see bigger consoles get onto the market and to see top end engineers using and loving them.”