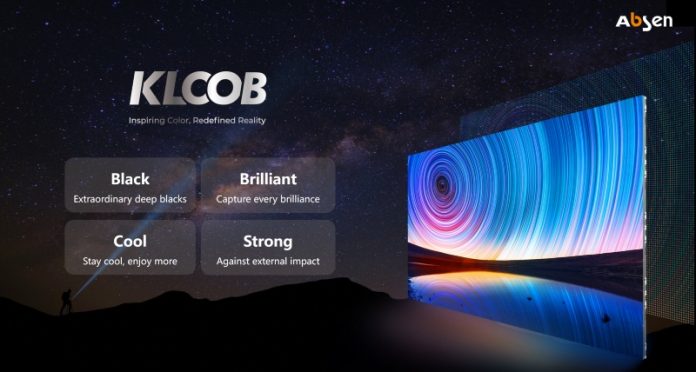 Absen has debuted its latest breakthrough product series, Micro LED KLCOB, in a livestream event from its headquarters in Shenzhen, China, viewed by over 300 stakeholders across the world.

Golding explained that advancements in LED technology over recent years and the acceleration in 5G + 8K technology have ushered in the Era of Micro LED, once considered the future of displays. Actively developing IMD and COB technologies since 2016, Absen’s depth of knowledge honed through two generations of Micro LED products launched to global success by 2021, paves the way for the groundbreaking KLCOB series.

Presenting insights into the future trend of Micro LED display products, Rengel predicted accelerated replacement of traditional technology, as well as a 34.2% compound growth rate in market size over the next four years. Absen anticipates an expansion in channels of distribution by 2023 due to COB/MIP dual line technology, large-scale all-in-one screen sizes and pixel pitch reduction to 0.5mm.

“As the global leading LED product and service provider, we have spared no effort in product innovation,” stated Rengel, addressing Absen’s value added partners, who play a vital role in the company’s go-to-market strategy.

Banks then took up the mantle to deliver the detail of the product innovation. He explained that the key to Absen’s new KLCOB display, which combines extraordinary deep blacks with brilliant image, strong against impact – as well dust and moisture resistant – and maintaining cool for longer viewing periods, is Absen’s flip chip technology.

The technology offers lower power consumption at the same brightness, high contrast and high brightness uninterrupted by shadows or other obstacles, for a display with triple contrast and a screen four times stronger than traditional LED, 40% more power efficient with reliability doubled. A screen radiant and robust for business settings such as conference room, lobby, TV studio and beyond.

KLCOB’s black surface coating brings amazing black consistency improving the visual performance to an unprecedented level for greater viewer immersion but without the glare and reflection. The non-glare surface light source brings a softer and more uniform light to relieve the eye fatigue experienced when watching the screen for a long time.

Full flip chip COB technology and Absen’s HBB common cathode technologies keep the KLCOB cool for stunning visuals without the heat. The investment into the strength of KLCOB assures a collision and oxidization proof panel whilst supporting its breathtaking proportions. The KLCOB Ultra High Definition screen is available at a staggering size of 433in. The cabinet adopts a 16:9 display ratio which can be easily spliced into 2K, 4K or 8K screens for a truly immersive viewing experience.

Yet this mighty display treads lightly. It’s full energy saving potential is achieved through a combination of four technological innovations, which reduce energy consumption by 40% compared to traditional screens under the same conditions. KLCOB practices the “Absen Green” concept.

Golding concluded: “Absen will promote the innovation and development of the technology and products and together with global partners, accelerate the widespread application of Micro LED display.”