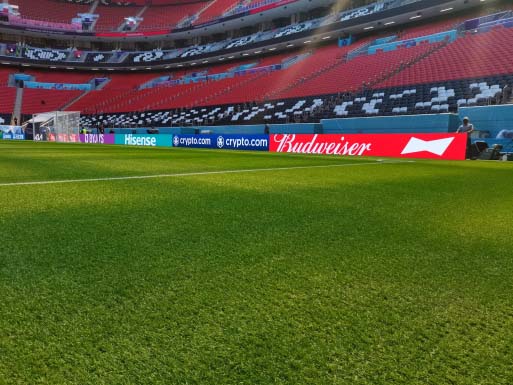 With the eyes of the world watching the FIFA Football World Cup in Qatar, Absen’s A99 LED perimeter display product played a central role in the fan experience.

With the products featuring at eight stadiums – Al Bayt Stadium and Lusail Stadium (hosts of the opening and final match); Ahmad Bin Ali Stadium, Khalifa International Stadium, Al Janoub and Al Thumama Stadium; as well as the Education City Stadium and Stadium 974 – a total of over 2,000 sq m of Absen LED display screen elements were deployed.

In addition to the stadiums of the 2022 World Cup, Absen displays feature in the UEFA European Championships, the NBA, and the Formula 1 World Championships, among many others.

Absen’s A99 stadium perimeter display features independently waterproof modules alongside an IP65 water protected power box, and parallel data and power connections to ensure that any fault will not affect the operation of the modules.