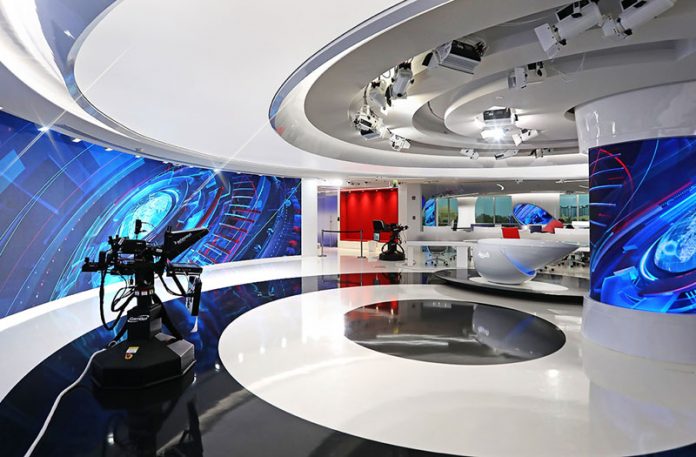 Following an extensive modernisation of its multi-venue 26,000 sq ft facility including newly designed newsroom and studio spaces, production areas and more, the broadcaster was looking for a fixture to work alongside the curved swaths of LED video present in the studio.

Lighting Designer in Venuetech’s Design & Application department, Ziad Shames Eddine, specified the KL Fresnel 4 CW for the space with lighting design handled by Safwan Harcouss, Head of the Lighting department at the MBC group. “The Al Arabiya channel has undertaken several renovations over the past few years in order to get the best light quality and therefore the best image quality possible,” stated Harcouss, who listed a small product size, brightness and high CRI as three key factors in fixture specification.

“We needed a CRI of high quality to be able to get perfect skin tones for the camera. Knowing that the skin colour of presenters is different from one to another, we wanted to avoid any difficulty in the tone of the image. We did tests on camera using different skin tones and based on our tests, we decided to use and order the KL Fresnel.”

Harcouss said that due to the low height of the ceiling, a small lighting fixture was preferred. “The lights are visible on camera and for that reason we did not want big, bulky lights in the ceiling,” he stated. “Not only did we want lights that visually suit our studio, but we also needed something with power that has a long life expectancy as the studio is used 24 hours a day. We have been using our Elation lights for one-and-a-half years now and have not faced any issues.”

The KL Fresnel CW series is a line of cold-white LED Fresnel lights with 5,600K Cold White LED engine available in 50W, 150W and 350W models. The 100 KL Fresnel 4 CW fixtures, 50W models, are installed throughout the ceiling to provide bright and clean light for the studio and high-quality key light for the news presenters.

Used for a variety of purposes including keylight, washes and front light, Venuetech’s Ziad Shames Eddine described the KL as “one of the best products for TV production and theatres at the moment”. He added: “The accurate colour temperature and the high CRI make it a high-quality fixture for broadcast. Also, because of space constraints in the studio, the small size of the fixtures, the light weight and the fact that they produce little heat were important.”

Compact and discreet to place, the cooler running LED lights help to keep the overall temperature of the studio lower, meaning less strain on the air conditioning system and less noise. “The lighting system is not only energy efficient it is also a low maintenance solution, as Al Arabiya personnel do not have to deal with bulb changes,” Eddine concluded.