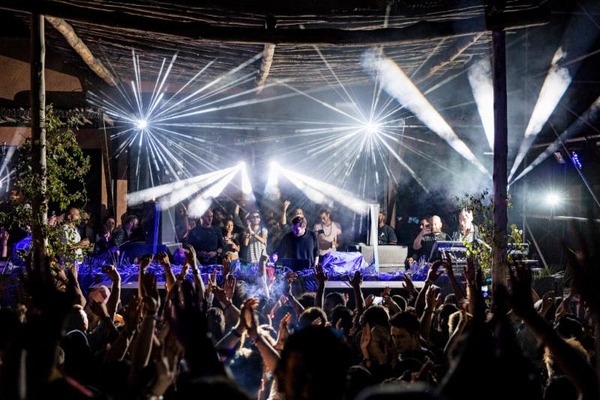 “When I was specifying a desk for Oasis, 1 of the main things for me was ease of access. Avolites consoles are the only consoles that tick all the boxes for me, especially when busking a show. The line-up at Oasis is mainly DJs and they can change their set at any time. The Tiger Touch II has a clear layout and intuitive software features that make it perfect for me,” explained Binks.

The Oasis Festival featured a line-up of top underground electronic artists including Nicolas Jaar, Solomun and Daniel Avery. The event was open to the public for 4 nights, with Solomun playing a 8-hour set on for the festival’s opening party. “I was headhunted by Karim and his team from Energy Sound, Light & Video, because of my 18 years of working at London nightclub, Fabric,” Bing continued. “For Oasis, I was given the creative brief to keep the lighting in line with the festival’s unique atmosphere. The stage is stationed near a pool and surrounded by palm trees so the lighting needed to be in harmony with this.” Bing and his team covered the metal work of the stage with sugar cane, leaves and black cloth to ensure it blended in with the environment. Adding in some rotating half-mirror balls allowed him to create a sunburst effect over audiences, reminiscent of the Sahara rays.

“I create every lighting movement and chase myself, and this is why I opted for the Tiger Touch II as my control console. I feel passionately about creating original and dynamic lighting on whatever show I work on, so having a console that is intuitive and lends itself to live control is essential for me.”

The Tiger Touch II is Avolites’ most specified mid-sized lighting console. The console features 10 pageable playbacks and ten static playbacks, perfect for instant, live access. The Fader Wing opens up control with an additional 30 faders from instant access to playbacks, fixtures and palettes. “I specify Avolites on every gig that I do,” Bing concluded. “The team there always help me out.”