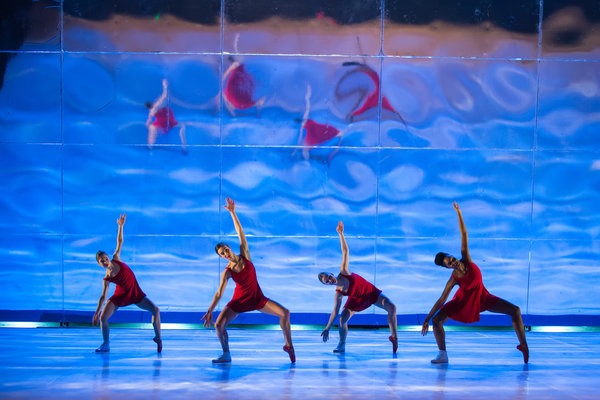 Set, lighting and AV designer, Wilhelm Disbergen, relied on a Hippotizer Boreal Media Server and a giant mirror to create something extraordinary for the ballet production of Big City, Big Dreams, staged at the Joburg Theatre, in Johannesburg, South Africa.

The original showcase, directed by Fiona Ramsay, included collaboration between the Joburg Ballet, Vuyani Dance Company, and Moving Into Dance Mophatong dance companies. Over 40 professional dancers adorned the stage as classical ballet infused with contemporary and street dance.  The focus of the set was a giant mirror (15 metres by 9 metres) suspended at a 45° over the white ballet mats below, enabling the audience to see the dancers from above.

“I also projected visuals on the floor that reflected onto the mirror behind the dancers because I used strong side lights, I could wrap the dancer in a clam shell of visuals. During the finale, the wall lifted and was almost perpendicular to the floor, giving the full company a gigantic silver wall to dance in front of and giving the audience a view of themselves watching the show,” Disbergen said.

Thanks to the Hippotizer Boreal, the enormous image (16 metres by 16 metres) was simple to set up. Two stacked Christie projectors, supplied by Staal van den Bergh over-lapped slightly to achieve the square format. “It was wonderful to see the dancers enveloped by the numerous layers which gave the production a rich and authentic Joburg look and feel,” assured Disbergen. Top South African programmer Glenn Duncan zlxo assisted on the production, while the Hippotizer Boreal controlled 16 layers of content over 2 viewports.

“This gave us immense freedom in composing the final tableau. Images were sometimes made up of many different images blended together and moved to achieve the best look. The strange thing was that because we were seeing the floor reflected in the mirror, all images and videos had to be not only turned upside down, but flipped left to right as well, so that it read right. Sometimes I deliberately left the images like that so that it looked as if you were on the inside of a bar window looking out,” explained Disbergen.

A grandMA2 full console triggered two fibre DVI-D outputs for the two projectors over ethernet. All visuals and low-resolution video was streamed to the lighting console via CITP protocol, enabling the users to see the video running live on one of the console screens when selected. “What I enjoyed was seeing how the follow spots made long shadows behind the dancers and this followed them upside down as a reflection above, melting with the projected image underneath and above.

“The set consists of only a bare black stage with an enormous steel mountain and a single steel mine shaft, but I was able to transform the visual picture for countless scenes effortlessly using Hippotizer Media Servers, keeping the audience engrossed and visually stimulated. I have used the Green Hippo products in many other productions too, and the audience’s response to it has always been terrific,” Disbergen concluded.