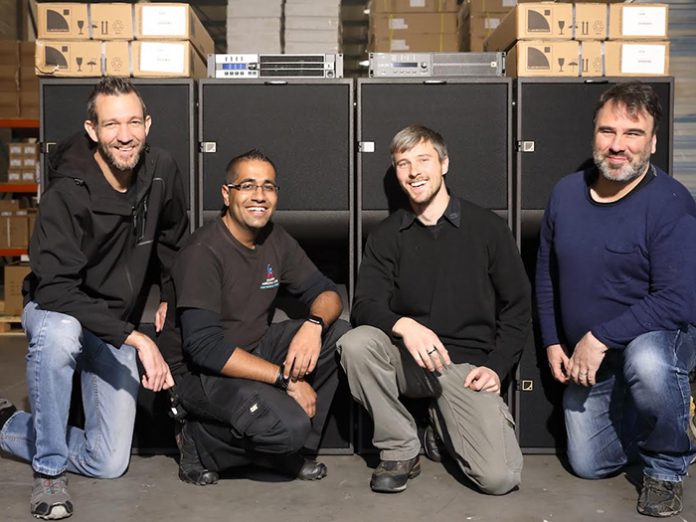 As the technical supplier to most international Bollywood Productions performing in South Africa, rental company Bass Mechanics has invested in additional L-Acoustics equipment to complement its existing systems.

“I was in standard seven (grade 9) when I started,” Sushil fondly recalled. “We were all turning 16, so my friends were having birthday parties.” Before long he was doing his friends’ 18th birthday parties, 21sts and so it continued with him making a name in Lenasia, the neighbourhood where he grew up.

Word of mouth had Sushil keeping crowds on the dance floor, and he completed an Audio Engineering Course and worked a stint at another rental company.

Sushil’s big break into the corporate realm came in 2004 when he was asked to be the service provider at a Bridal Fair in Lenasia, by his now wife Dimple Patidar. “That’s when we took the step to invest a decent amount of money into professional equipment and from there on it grew.”

At the time, Duncan Riley from DWR Distribution worked at Electrosonic, and Sushil purchased Martin moving head spots from him. JBL SRX 700s were supplied by Wild and Marr.

Today, Bass Mechanics do 90% of international Bollywood Productions visiting South Africa – about four to eight shows a year. While the productions are a huge affair, the budgets are not so.

“We make big investments into professional gear,” Sushil elaborated. “But it’s also the service you get, knowing there is the necessary back-up when needed. We may not see our return as quickly as we want to, but know we’re getting a reliable product.”

Sushil was introduced to L-Acoustics when buying a pre-used Kudo System from Strike Productions when the company closed some years ago. “I didn’t mind buying the product, but I needed to know who the agents were and what spares and service would be available.” Richard Smith represented the L-Acoustics brand, met up with Sushil and assured him of his continued support.

“Ever since, although we stock other audio brands, L-Acoustics has become something very different for us,” said Sushil. At the time, a small network of L-Acoustics users was born with companies like Bass Mechanics, Gearhouse, Sound Stylists, Afrika Audio and AJR doing a lot of cross rentals. Slowly the name grew.

More recently, when it was time for Sushil to upgrade his amplifiers, he made an L-Acoustics LA8 amplified controller purchase from DWR Distribution who was appointed in early 2018 as the L-Acoustics agents in Africa and where Richard Smith is now based. Bass Mechanics also invested in L-Acoustics ARCS Wide, ARCS Focus, LA12X amplified controllers and KS28 subwoofers. Sushil hopes to continue building the brand.

The L-Acoustics LA12X relies on a proprietary switch mode power supply (SMPS) equipped with a DSP-controlled PFC, capable of delivering 12,000 W regardless of mains voltages (from 240 V down to 100 V.) The PFC offers high immunity to unstable mains and lowers typical power consumption by up to 40% for the same usage conditions i.e., more power is available to the output stages from a given circuit (16 A at 230 V mains, 30 A at 120 V mains).

DWR Distribution first starting dealing with Bass Mechanics in 2008, selling Robe fixtures just before the World Cup. “It has been a good relationship since then,” said Robert Izzett of DWR. “I’ve always said that Sushil is one of the best companies to do business with. He always does what he says and that’s rare.”

Sushil is very grateful to have the support from his family and awesome crew, who are curious, open to learning, are courageous and motivate him. “I enjoy the humour they bring to my challenges and I appreciate how they challenge and grow themselves. They make me want to do what I enjoy the most.”

One thing he will never do is forget his roots. “We started with a small community who have taken us to where we are today. To be honest with you, in those days we used to do weddings at five hundred bucks an event… we can’t forget those days.”