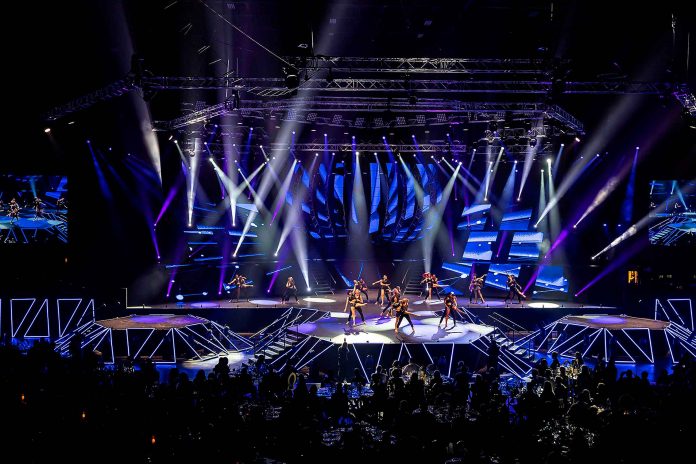 More than 250 Robe moving lights were used on the first major live corporate event staged in South Africa since the COVID-19 pandemic.

Organised by international services, trading and distribution company Bidvest for key clients, suppliers and staff, Future Now – which was staged for the first time at the Time Square Arena in Pretoria with newly appointed CEO Nompumelelo Thembekile Madisa – was a special commission for Bidvest created and produced by the multi-award-winning team of David Bloch of David Bloch International and Choreographer Debbie Rakusin.

Gearhouse South Africa (GSA) was entrusted as technical supplier, with Pieter Joubert as technical director. Stage, set and lighting design was delivered by Tim Dunn from nVisible agency, who flew in from the UK to programme and run the show lighting, which he did in close collaboration with Robert Grobler from GSA.

Previously, Dunn has lit the show when living in South Africa and working for GSA, and for this occasion the company supplied additional lighting kit that was added to the substantial Times Square house lighting rig.

Gearhouse Group company Sets Drapes Screens built the set. This comprised a series of interlocking geometric shapes including three hexagonal thrust stages at the front surrounded by a series of triangular-shaped facias outlined in LED tubes, which filled the entire width of the room. Upstage was a recessed and raised area that showcased concept segments of some of the production dance routines that were performed by a large cast of over 200.

The video elements supplied by Led Vision also spanned the whole width, creating an epic wide-stage reminiscent of the African skies and horizons, and were designed in layers with an elegant eigh5-way centre cluster of LED strip suggesting a powerful, positive South African sun image at the core of the space, also following the shape geometry idea. Along each side of the stage were three levels of video panels, with left and right IMAG screens completing the picture.

“The intention was to use the video to add depth and vibrancy as well as subtlety to the stage – I wanted to get a lot of video in there, but not for it to look overpowering,” commented Dunn. Video playback content was supplied and operated by Inka Kendzia.

The gala dinner event was divided into three sections: a rousing set of speeches; followed by The Bidvest Show – a high-energy performance with over an hour of action created especially for the event with the show’s musical direction by Bryan Schimmel; and finally, a concert by international star, Seal.

The biggest challenges were ensuring enough lighting to cover the full dynamic spectrum of the show – from the dining to the singing and dancing to the international star performance. “I simply selected the best lights for the design, so there was a lot of Robe on the plot – power, reliability and versatility – everything you need,” Dunn stated.

The 130 Pointes were the cornerstone of the lighting design. These were positioned in the air all over the stage, set and risers and were used as a multifunctional unit. “I still love the Pointe,” commented Dunn. “It gives so many options in a small package and looks great on any stage.”

The 45 Spiiders and 52 BMFL Blades plus 12 BMFL Spots were the key lights and the main stage lights. With large ensembles of dancers for most of the numbers, they needed the flexibility of having lights from all angles of the rig contributing to the looks.

Two additional BMFL WashBeams on RoboSpot systems were positioned on two of the short downstage trusses rigged with pin spots for the dining tables – and were used for everything onstage including the speeches, with the operators and their BaseStations located backstage at dimmer world.

The 16 MegaPointes were mounted mainly on the set in between the side LED panels, where they were the main side dancer lighting positions as well as producing cool back lighting effects and back-of-shot eye candy for the cameras.

The show also reignited the passion and dedication of everyone involved and underlined the amazing skillsets, imagination and teamwork that go into producing world-class shows in the region. It involved the talents and expertise of over 120 technical staff working across all disciplines and “to re-start with something of this scale and profile was a fantastic boost to our SA technical production industry,” emphasised Pieter Joubert, who initially started working on the show in September 2021.

Eyal Yehezkely was GSA’s project manager for the event. FOH sound was mixed by Johan Griesel for Seal, and Jakob de Wit for the Gala event and other artists, both using the Times Square PA house system.

All other technical aspects were delivered by the Gearhouse Group of companies, except for Pixel Nation, which provided the Watchout system and services for the AV playback, and MGG as in-house Technical Supplier to Time Square, which provided rigging and additional lighting support including the 16 MegaPointes that were so central to Dunn’s design.