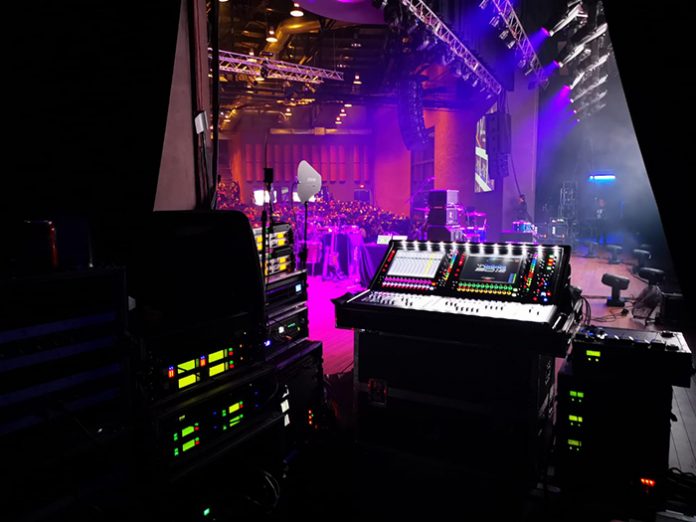 Blue Array Productions, an audio rental company in South Africa, has invested in an SD12, its third DiGiCo console.

Blue Array’s initial buy into the DiGiCo brand, a DiGiCo SD5, caused a stir in the South African market. With such a great reaction, the company decided to invest in a smaller platform console, purchasing a DiGiCo S31, before recently taking ownership of the SD12.

“Blue Array’s Kobus van Rensburg and Marinus Visser have been wanting an SD12 since the console was launched in 2017,” said Kyle Robson from DWR Distribution, DiGiCo’s distributor for Africa. “We worked with them on costings and they finally decided to push the green button.”

Visser, one of South Africa’s top audio engineers, is a big fan of the DiGiCo platform and needed an SD console that would cater for all his requirements in a lightweight package that would be easy to move around. “Once he had played with the SD12, he was sold,” said Robson. “It does everything he needs it to do and gives him the same audio quality and functionality as the SD5, just lighter.”

After the need arose to replace older consoles and to come up with business strategies that ensure Blue Array maintains a niche in the market, owner Kobus van Rensburg sees the new SD12 console as a great financial investment. Because it is such a new console, and because of DiGiCo’s reputation for constantly improving its products, there is also a great excitement about how the console will develop in a couple of years’ time and Blue Array sees it as a fantastic long-term investment.

Various audio engineers at the company have already put the DiGiCo SD12 to the test. It has been used on several shows including Seether, a rock band who played at Marks Park in Johannesburg.

“The operation of the SD12 is identical to the SD5, and because Marinus knows the SD5 very well, the new console is a walk in the park for him,” said Robson. “The footprint of the console is small, and its two screens are a big plus. The build quality is fantastic and the whole feel of the desk is very easy to manoeuvre around.

“As a new console from DiGiCo it’s really stunning what they have achieved with the manufacture of this desk. It has been accepted extremely well around the world. There are many broadcast guys who use it, it’s used on many festivals and it’s starting to make the international riders. I definitely think we are going to see more of it in South Africa.”