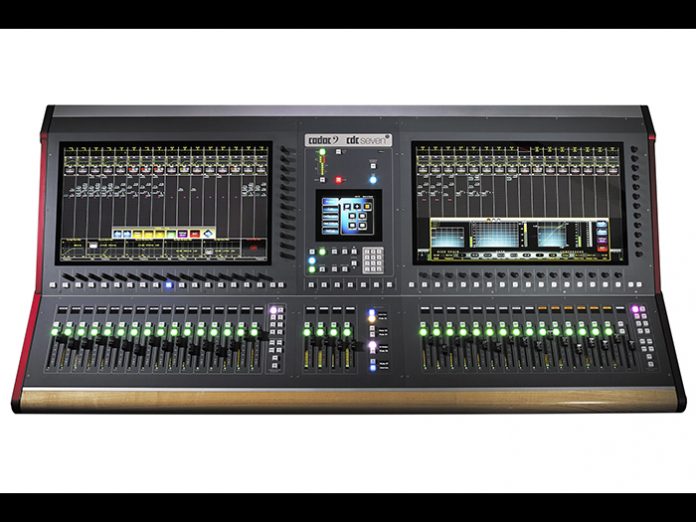 One of 2 new digital consoles Cadac launched at Prolight+Sound in Frankfurt this year, the new CDC seven-s replaces both the original CDC seven iteration and the CDC eight, the inaugural expression of the platform,

As the new CDC flagship console, the CDC seven-s expands the 96 input count of the original CDC seven to 128. Additionally, the new model ups the bus count to 64, of which 56 are assignable in FOH mode and 62 in Monitor Mode. The new console also features a number of additional hardware buttons, aimed at speeding up navigation.

CDC seven-s ships with the latest Version 5 CDC Console Software which boasts a number of new features – including Cue Ripple and Cue Preview – and several performance enhancements that will feature across the full CDC range. These include a redesigned Control Screen with new graphics and layout, improvement to the overall GUI. Delay Groups allows channels to be grouped and have delay applied to the group. Bus Send VCAs allows 16 individual VCAs to be available within each and every mix bus in monitor mode for unparalleled control.

The CDC seven-s retains the physical frame and control surface configuration of the CDC seven (excepting the additional new hardware buttons) with dual 23.5” 16:9 hi-definition operating touchscreens and their associated rotary encoders, a mid mounted 6.5” system control touchscreen, and 36 motorised faders. The exceptional CDC ‘human interface’ and feature set combine in aiding the workflow and allowing the engineer full creative freedom, unhindered by operation of the technology. The dual 23.5” touchscreens display the uniquely intuitive CDC swipe-able user interface. Encoders immediately to the right of and below both screens further encourage the instinctive use of gesture – touch and swipe – operation in navigating and operating the console.

The major advantage of the dual screens is the ability to simultaneously display and control multiple tasks; e.g. the VCAs can be displayed on 1 screen while the inputs to the VCAs are displayed on the other. The faders and encoders naturally follow the GUI displayed on the individual screens, resulting in further increases in the speed and flexibility of the workflow. The CDC feature set includes Cadac’s unique Monitor Mode with Mix Focus, as well as the ability to create custom fader layers. All 36 motorised faders feature stereo metering and a full-colour user definable OLED display.

The console features 16 creative onboard stereo effects and is preconfigured with an integrated 64 x 64 Waves interface; enabling direct connection to a Waves MultiRack SoundGrid server with access to the vast Waves’ library of plugins (license dependent), as well as multitrack recording directly to a laptop.

A further additional feature of Version 5 OS is a Dugan Post fade Insert point for Waves, with auto-assign. This allows the easy setup of the Dugan Automixer within Waves along with an auto-patch function (when using Waves server with the Dugan Automixer Plugin). The Waves Dugan Automixer plugin automatically controls the gains of multiple microphones in real time, dramatically reducing feedback, ambient noise and comb filtering from adjacent microphones. It maintains a consistent system gain, even when multiple speakers are talking simultaneously, and makes perfectly matched crossfades, without any signal compression or a noise gate. The plugin is particularly useful in commercial AV applications deploying multiple microphones such as conferencing and meeting rooms.

Cadac Marketing Manager James Godbehear said, “Launching CDC seven-s at Prolight+Sound and then showing it immediately afterwards at PLASA Focus in the UK, there was an immediate appreciation of the increase in I/O capability, plus the additional features of Version 5 CDC OS along with the improved GUI. CDC seven-s offers all of these improvements over the original CDC seven at no additional cost.”