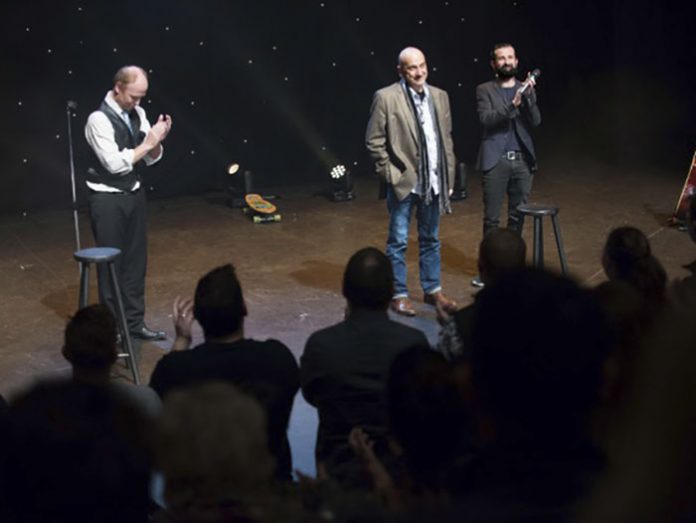 The Sneddon Theatre was host to a charity event to raise funds for medical expenses for Themi Venturas, a local theatre practitioner and an industry legend based in Durban.

The event was well attended by many key industry players, who generously donated money towards the drive. South African comedian and actor, Aaron Mcilroy, wore two hats on the night, one as friend to Themi and the other as a performing artist. “I had the privilege of sharing the stage with my long-time friend John Vlismas,” said . Mcilroy. “It’s incredible to think even though we have known each other for over 20 years until this day we have never shared the stage in a performance for the public.

“The evening was absolutely amazing! Not only was the audience brilliant but everyone in the entertainment industry had lined up to offer their services for this worthy cause. Companies like DWR and Black Coffee, offered equipment and their time for free. Not to mention Jackie Cunniffe and the whole of the Elizabeth Sneddon Theatre staff who were simply outstanding in making sure that the show was a resounding success. In a world where we are often bombarded by bad news it was just so uplifting to see that people actually care.”

Themi needed finances in order to get medication which is not available in South Africa and R90 000 was raised for the cause. In addition to this DWR’s SOS Charity Fund contributed a further R10 000.

“This show I will never forget as long as I live,” said Mcilroy. “Not only because we laughed till we cried but also because it felt somehow like a sacred moment, where we as a community got the opportunity to honour a theatre legend. To everyone involved – thank you! To everyone who helped – bless you!”