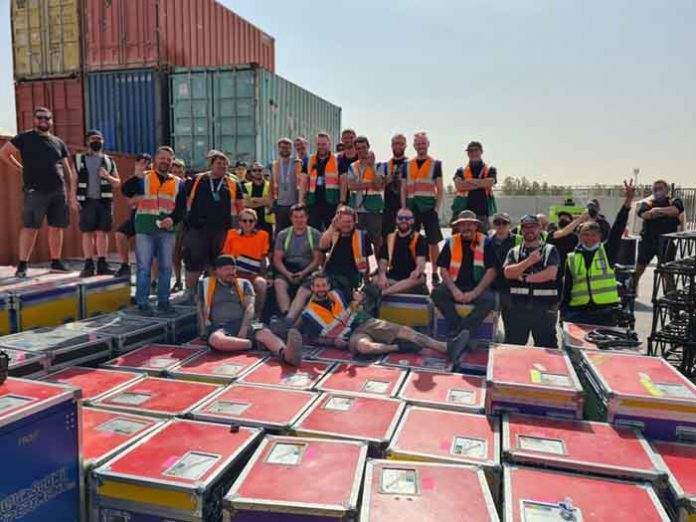 With an extensive and ever-evolving stock of intelligent lighting and LED, Colour Sound Experiment has become a mainstay of the industry in the 33 years since it began in 1989. In recent years, the UK-based company has seen demand for its services skyrocket in the Middle East, with Saudi Arabia in particular proving a fruitful market. “The volume of shows we were being asked to look at in the country was astounding,” commented Managing Director, Haydn Cruickshank.

To service this sustained demand in the country, the company has opened a brand-new office in Jeddah. A 30,000 sq ft facility, the new warehouse is already full of new stock from the likes of ROE Visual, Leyard, Ayrton, Claypaky and MA Lighting. “We also have a good stock of Litec truss and EXE D8+ motors, as well as CAD and previsualisation facilities on site,” Cruickshank added.

A small Colour Sound team travelled to the Kingdom from the UK to get the operation up and running. “We sent some people there to help get things set up and provide training and integration,” Cruickshank revealed. “A few are staying but most of the team there are new employees.”

This move is part of a long-term strategy on building sustainably in the Kingdom, bringing in and nurturing local talent and ultimately helping build towards the Saudi Vision 2030. “It’s crazy that currently to put on a big show in Saudi Arabia you have to fly in many of the techs and bring most of the kit from other countries,” Cruickshank stated. “Our local training programme is a huge part of the plan to help create a sustainable live events industry in the country.”

Saudi Arabia is a market that Cruickshank is incredibly excited about. “It is still in its infancy in terms of live events and that presents huge challenges, which is part of the appeal,” he shared. “It’s also by far the biggest population in the region. The prospect of bringing awe-inspiring shows to a young population – most of which haven’t seen anything like it before – is extremely appealing.

“We’ve made a big commitment to the region and the Middle East is set to become an extremely important market for us,” he concluded. “Our aim is to get the Saudi Arabia branch to a point where there are enough local skills and knowledge in house that it doesn’t rely on the UK side for any technical support, or at least where that support is mutual.”

This article originally appeared in issue #34 of TPMEA.