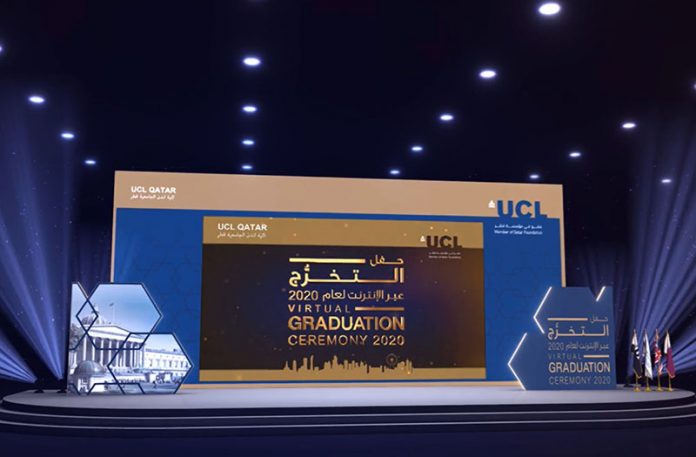 Creative Technology (CT) provided a live platform for a virtual graduation and legacy event for WMP Creative and its client UCL Qatar (University College London in Qatar), enabling students from all over the world to celebrate their achievements.

CT supplied a full virtual solution, content management, communication system, and simultaneous translation, which was controlled from the company’s Middle East headquarters in partnership with the client, WMP Creative, Qatar.

The virtual solution allowed five different graduating classes and the academic staff to appear in six separate frames to ensure each class was easily identified throughout the ceremony. The equipment used for the virtual event was identical to a normal live show in a control room environment, minus the physical stage that would usually consist of the audio, video and lighting elements.

A key part of the solution was exporting the Notch content into CT’s disguise GX2C system. This integration enabled CT to use the disguise camera system to build a sequence of different views and simulate director’s cuts for the different cues in the show. The camera system integration gave the audience the perspective that the stage elements and the environment were real, enabling them to feel as though they were attending a live show.

CT integrated its Riedel system to the video conferencing platform to enable the client, crew and remote staff to communicate from anywhere in the world. A Riedel Artist 64 matrix frame, controlling six DSP 2312 desktop panels and six Bolero wireless belt packs was also supplied. These units were used by CT crew and clients within the CT virtual studio setup.

CT’s operators were able to program the E2 screen management system and media servers as they would in a normal live event setup from the direction of WMP, creatives and the show caller. The ‘live’ aspects of the show were implemented via video conferencing, and real-time confidence monitors were encoded to return the live feedback to participants, so they could watch the show as it happened. Along with a video return feed, the team could also communicate with the show participants to give them cues. This approach allowed participants to be integrated into the event from anywhere in the world.

The success of this solution is visible in the flexibility of the changes applicable in the design and in the real-time generative content that can be triggered and changed based on the client’s request. The graduation was streamed live onto the University’s YouTube channel and recorded so it could be played back via video on demand.