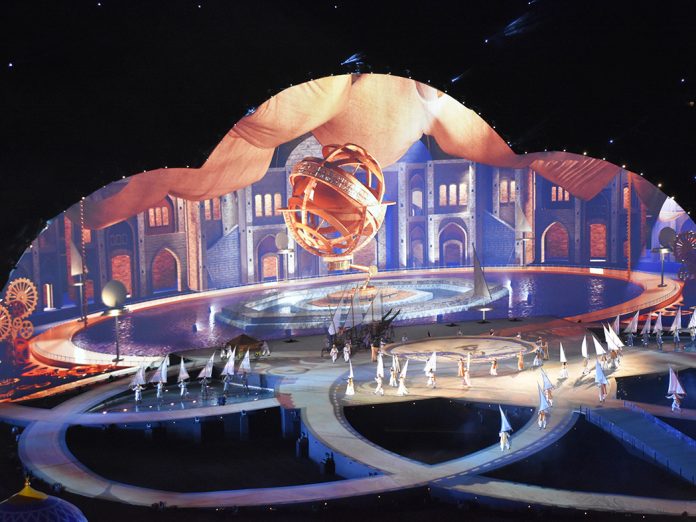 The Opening Ceremony of the 4th Islamic Solidarity Games, produced by Catherine Ugwu’s “Betty Productions”, featured spectacular visuals throughout the show and what was arguably the world’s brightest outdoor scenic projection imagery.

Responding to an initial brief to deliver projection across the back wall and floor of a stage covering half an athletics stadium, Creative Technology (CT) specified 78 Panasonic DZ21 projectors driven with VYV’s Photon Media Server system. While the original brief and specification regarding the projection area and projector count was a little smaller than the Rio Olympics ceremony that CT were involved in last year, many of the same challenges applied.

Following the first test set up, the projection surface was changed from a gauze material to a solid white fabric, the contrast in the content was increased and further 40 projectors were added to ensure that the quality and brightness of the overall image surpassed anything that had been seen before on a ceremony of this type.

The combined effect resulted in the main projection surface burning through any of the typical issues with light spillage from the stage. Unlike a number of other shows in recent years (including CT’s record breaking Hoover Dam projection in 2015), there was not a Guinness World Records official on site measuring the light output or surface illumination. However, based on the statistics from previous records, the surface brightness of 800 lux achieved in Baku was significantly higher than any of the previously documented outdoor projection projects making this arguably the world’s brightest outdoor projection project.

The spectacular result was achieved by fantastic teamwork from some of the production industries leading specialists brought together and inspired by Betty Productions’ persistent attention to detail and determination to deliver a truly spectacular ceremony.