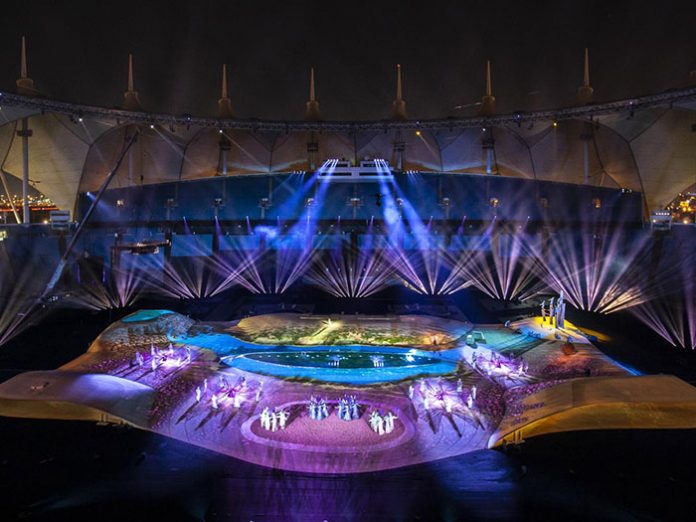 On 16 January 2020, the grand finale of Riyadh Season, Leila, The Land Of Imagination took place at the King Fahd Stadium. Created by Marco Balich and his all-female creative team from BWS, the spectacular event captured the essence of Saudi Arabia through an adventurous 10-year-old lead character, Leila, symbolising the next generation of Saudis who will experience the realities of the changing kingdom, established by Vision 2030.

The stage had multiple projected scenic reveals, including a 12m-high inflatable fortress, a gauze house, which revealed beneath the field of play, an inflatable hand and a hot air balloon, which moved position during the show.

“The biggest challenge was projecting onto the moving scenic elements as there was a risk they could be affected by varying wind speeds and direction,” Tom Stocks, CT’s Senior Engineer explained. “Our disguise operators were always on standby to make real-time adjustments to the projection lineup as the scenic elements revealed themselves during the show.”

CT provided BlackTrax real-time tracking technology, which was integrated into the technical solution to track performers and scenic elements throughout the show. “In the stadium catwalk, a redundant camera system was installed, consisting of 14 BlackTrax Prime 41 cameras and six disguise Omnical cameras,” Stocks revealed. BlackTrax was used to track 14 moving discs on the field of play, projecting content during a large choreographed element of the show. “It was also integrated into the lighting design and was used for tracking Leila for the duration of the show,” Stocks continued. “A total of 60 beacons were used to track performers, horses and scenic elements.”

CT also delivered a full site-wide monitor system, including its new Birddog A200 PTZ cameras allowing production, stage management and creatives a full overview of the site during the rehearsals and show. The company also provided a daily rehearsal record with embedded time code for review by the technical and creative teams.

Dan Hughes, CT’s Project Manager commented: “Working closely with the technical management team from BWS, it has taken seven months preproduction, six weeks on-site and three weeks of rehearsals to perfect this event and our team at CT has enjoyed every moment of it. It was a pleasure to be part of such an amazing event, and we look forward to working with Balich again in the future.”