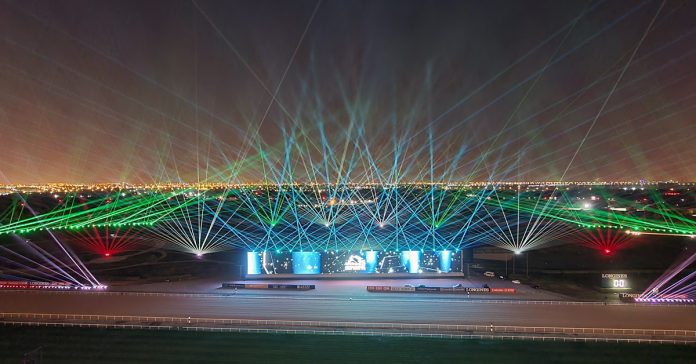 On Saturday 27 March, the 25th edition of the Dubai World Cup took place at Meydan Racecourse, bringing talented racers from all over the world to Dubai.

Due to His Highness Sheikh Hamdan bin Rashid Al Maktoum’s untimely passing, the original closing ceremony was fittingly changed to a tribute in honour of the late Deputy Ruler of Dubai and UAE Minister of Finance.

Due to size of the main grandstand and track area, CT utilised the venue’s in-house fibre, SMPTE patch for all cameras, and network connectivity. The company’s team of network professionals cleaned and proved all the lines before they were used in advance of the event.

For the communications, CT used a Riedel artist 64 frame as its matrix, Bolero wireless belt packs for the event’s remote users and Clear-Com HelixNet was deployed throughout the venue through Luminex 14r and 26i switches, which also carried the data for the Riedel DSP-2312 user panels. A total of 60 Motorola handheld portable radios were used, along with eight SLR5500 repeaters to interface into the communications system.

Video playback was controlled through a 5k pixel base Dataton Watchout playback system and Barco E2 graphic mixer. “We also provided a seven-camera PPU package with a combination of RF and wired cameras,” commented CT’s Head of Engineering, Tom Stocks. “Our cameras were placed remotely across the large site, ensuring full coverage of daytime race links and the closing tribute.”

CT also provided infrastructure and distribution to integrate video feeds to and from local broadcast trucks and drone cameras. “Remote control panels were supplied to key members of the production team, allowing them to view individual cameras and multiviewers around the site in various control locations,” Stocks added. “The final PPU mix was processed in our E2 screen management system to apply the creative masking for the IMAG screens.”

Turner concluded: “It was an honour to be part of this fitting tribute for the late Sheikh Hamdan bin Rashid Al Maktoum. The race day and tribute went very well, and it was great to be back on site. Our client, HQWS, and Dubai Racing Club, created a safe and COVID-19 secure environment with the greatest of professionalism, and made this DWC a joy to work on.”

Louay Al Qaissi, HQ Worldwide Shows Project Director, added: “Thank you to the CT team for being phenomenal with the delivery of DWC2021 on behalf of the HQWS team. Hats off to CT!”