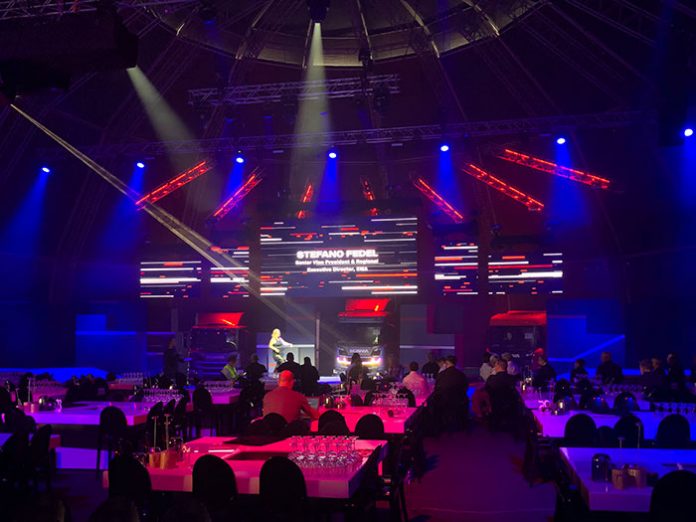 Scania, a leading global manufacturer of trucks and buses, recently launched its new product line for the African market at a much-anticipated launch event, held at Montecasino, Johannesburg.

Blue Moon brought on board Dream Sets to manufacture the set and exhibition areas and to deliver technical services for the event. Toni Van Oostenrijk of SpaceCadet, who took the lead role in designing the set, drew inspiration from the front grill of the new Scania trucks, which he worked into the design of the bar and reception area. “When we proposed this idea to the client, they seemed a little skeptical,” said Dream Sets Project Manager, Billy van der Merwe. “However, as with so many of Toni’s designs, as soon as they saw it, they fell in love with the concept.”

van der Merwe explained how Dream Sets, together with their partners, managed to conceal and then dramatically unveil three full-sized trucks inside a dome structure by using some creative stage design.

The event was hosted in one of Gearhouse In2Structure’s six Bay SupaDomes, which spans an impressive 36m by 72m and boasts a load capacity of three tonnes per arch for rigging.

Dream Sets built a fully functioning stage, which was used to conceal the trucks, before they were ultimately revealed. “We constructed the stage using blocks on wheels and a solid wall that was used to screen the space beyond the stage, where the Scania trucks were on exhibition,” van der Merwe explained. He went on to point out that the tetras-like boxes were on wheels and therefore could be moved into position to reveal the truck showroom space behind the stage at the right moment.

To add some drama to the reveal, Dream Sets made use of its extensive inventory of event lighting inside the venue. “Our entire lighting inventory was in the dome, including our Robe LEDWash 800s, ColorSpot 700s and 150s, with a few additional fixtures,” van der Merwe revealed. “We also worked closely with LaserX to create an innovative and impressive laser show during the climactic reveal.”

There were a number of challenges that had to be overcome to make the event happen. “Logistics are always going to be a test on an event of this size, which was further complicated by the fact that we had to manoeuvre around full-sized trucks that were an integral part of the set and event design in a confined space,” van der Merwe recalled. “We also had to contend with the fact that Montecasino is one of the busiest venues, in one of Johannesburg’s most intense business and residential areas.”

The PM credited the amazing teamwork and open communication between stakeholders as central to the success of the launch. “We are very proud to have delivered an event that has been recognised as one of the best the global launches of the New Truck Generation by Scania,” he commented. “We would not have been able to achieve these high standards without everybody’s passion, commitment and attention to detail.”