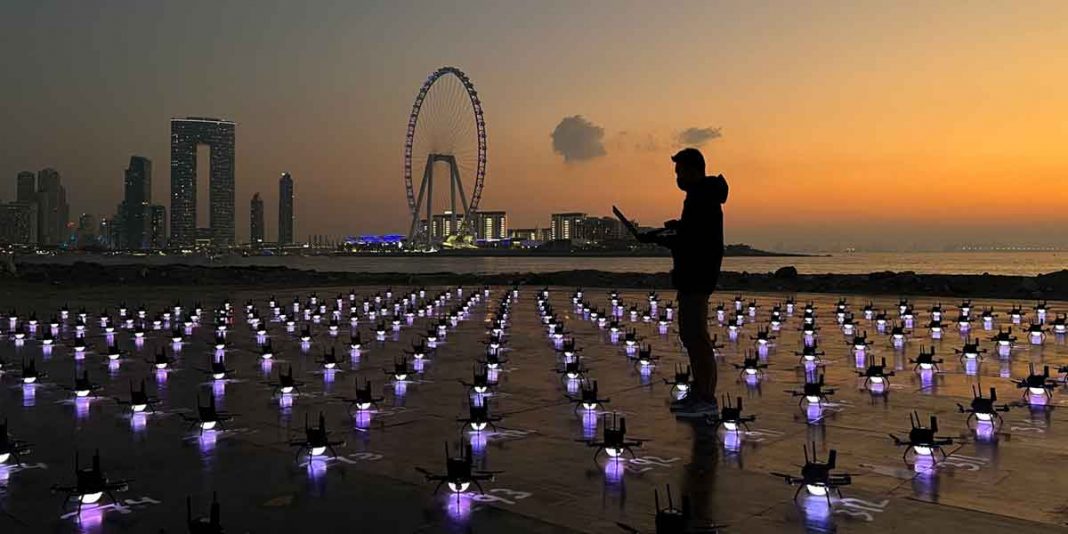 Drone shows have become increasingly popular in recent years, with everything from brand activations to national celebrations making use of the futuristic aerial storytelling medium. In most cases, these shows are one-off performances experienced live only by the lucky few in attendance. However, Visit Dubai and DXB Live bucked this trend, tasking SKYMAGIC with producing the longest ever outdoor drone residency for the duration of Dubai Shopping Festival.

Taking place at 7.30pm and 9pm every night on Dubai’s JBR Beach, the shows celebrated the past, present and future of Dubai, against the iconic city skyline. A total of 500 drones from the SKYMAGIC fleet were used over the 54-show run, to explore specific parts of Dubai’s heritage and culture, while picking up on technological innovations across the region.

“This project was an exciting opportunity for us to run a show over a series of nights,” began Ollie Howitt, Creative Associate at SKYMAGIC. “Although the residency had to end early due to unrest in the region and subsequent flight bans, we still broke the record for the longest resident drone show. It meant that we could deliver that ‘wow’ moment repeatedly, and many more people could experience it than with a one-off show.”

Howitt talked TPMEA through the process of advancing the residency. “Once the location, potential take-off and landing zone, flight parameters and aviation permissions were taken care of, we could then start a discussion from a creative standpoint about what story the client wanted to tell with the show,” she recalled. “For DSF, there were three distinct shows, which all had different storylines. It was a case of working closely with the client to understand what they were looking to achieve and then guiding them on how we could turn that into something visual with the drones.”

The show explored concepts based on Dubai’s future, including AI, robotics and the newly tested ‘flying car’. Other motifs focused on key parts of Dubai’s heritage, such as the Arabian coffee pot, a falcon, and the Al Sadu pattern. Complemented by the music of David Guetta’s Titanium, the dazzling display drew significant footfall to the area.

The Creative Associate explained the importance of previsualisation when it comes to making sure that on-site changes are kept to a minimum. “The only tweaks we had to make to this show were a couple of minor lighting alterations,” she revealed. “We often work with clients for two to three months in the lead up to a show and we always give them an accurate representation of what the show will look like, so there are no surprises when we get to site. That back-and-forth process is important to get the creative finalised in advance.”

SKYMAGIC uses bespoke software to programme its fleet of drones, which is also developed entirely in-house. Their system automatically calculates collision-free flight paths and optimises trajectories, enabling unique LED light design to be synched with music time code. “We build and fabricate all our own drones, which are 3D printed,” Howitt noted. “Our fleet is now into the thousands and it’s growing all the time, so we can do multiple shows in different locations at the same time. During DSF, we had one fleet in Dubai and another in the UK for the London New Year’s Eve show.”

With such a large fleet, the company can offer increasingly complex and creative shows. “The more drones you have, the more resolution you can achieve within the images and the denser the scenes can become. It also offers the possibility of having a split fleet, which allows quick cuts from scene to scene,” Howitt explained, adding that when it comes to drones, more doesn’t always mean better. “It gives you more freedom, but there are other parameters that come into play such as flight space and take-off areas. It doesn’t always require several hundred drones to achieve something creative and striking.”

Looking back on the project, Howitt was especially pleased with the fact that it fulfilled the team’s creative ambition. “This was most apparent in the third part of the show, which was based around the future of Dubai and was designed around the soundtrack to David Guetta’s Titanium,” she noted. “It was all about building up and releasing energy until a climax, which was a huge, explosive 3D moment. The entire show was something that I’ve wanted to explore for a while in terms of it being primarily conceptual and abstract, using beautiful 3D forms that are quite hard to explain until you see it in real life. That is when the drones are performing to their potential – when you’re exploring those ever-shifting shapes and movements. That’s what stood out for me as the biggest achievement from the residency.”

The Middle East has proved a happy hunting ground for SKYMAGIC, along with its sister company, UK-based creative studio, NEWSUBSTANCE, which has worked on numerous high-profile projects in the region, including Expo 2020 and UAE National Days. “The region is so exciting because the ambition is there, and it is always pushing to be the first and the frontrunner. They are always advancing technology and constantly improving,” Howitt stated. “It means that there’s an appetite for bold, new ideas – anything that’s audacious in design. It’s a great fit for us for what we’re trying to do as a creative studio and pushing the boundaries of both our technology and creativity. We hope that we will continue to do more and more work in the region.”