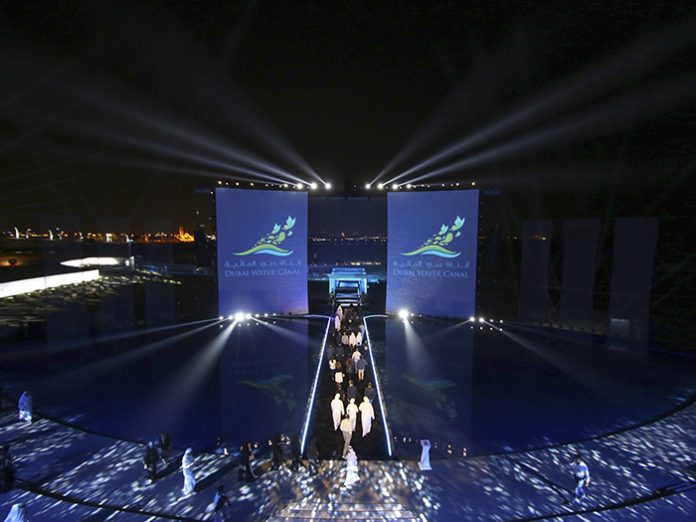 The new Dubai Canal opened with a spectacular ceremony hosted by His Highness Sheikh Mohammed bin Rashid Al Maktoum, Vice President and Prime Minister of the UAE, and Ruler of Dubai. Creative agency and show producers Prodea Group engaged the services of Protec, one of the Middle East’s largest and best known specialist event technology providers.

With over three kilometres of canal side to cover, the provision of equipment was huge. Protec Project Manager Simon Travis explained: “The brief [Prodea] gave us was to create something spectacular with lighting, audio and video, with an element of automation for the aerial artists on the main stage. With such a large waterfront to cover we broke the job down into manageable chunks for all departments: pre-function VIP arrival area, inside of the VIP tent, Main Stage presentation, the canal itself and the Legacy Zone.”

Travis added: “Over 430 Claypaky lights have been used; Alpha Spot 700’s were complimented by large numbers of Sharpy, Super Sharpy, K10 and K20 B-EYE’s, Scenius, Mythos. We also used the Clay Paky Scenius around the aerialists performances, whilst MA Dot2 and two full-size MA2 were used at main locations.”

For video elements, eight Barco HDF 30K’s were mounted to four towers for the water screens along the canal, with 12 more used on the main stage.