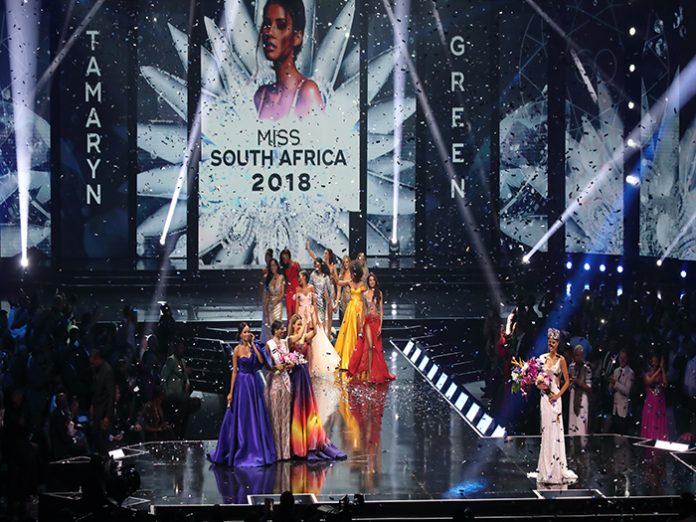 Miss South Africa 2018 moved to a new home, Time Square’s Sun Arena in Centurion, where the technical team went to great lengths to pull off what can only be described as the country’s slickest beauty pageant in 60 years.

A key feature, not mentioning the crowning of Tamaryn Green as the fairest in the land, was a massive LED display consisting of over 1,000 panels controlled by 2 Green Hippo Hippotizer Boreal Media Servers.

In the hands of some of the country’s finest technical professionals, the show ran like clock-work. Entertainment were appointed to produce the televised production which viewers could watch on M-Net (DStv Channel 101) or via live streaming, while Dream Sets were commissioned for the 4th time around to provide the technical and set elements.

In 2018, hosted at the brand-new Sun Arena, Dream Sets relied on the help of MGG, the venue’s in-house service technical provider for professional technical support. The impressive lighting and set design was created by Joshua Cutts and Andre Siebrits from Visual Frontier. Dream Sets has a proud history going back to 2008 as the set builders for this prestigious annual event. The relationship has grown over the years and in 2015 Dream Sets became the set as well as technical supplier to Miss SA.

“Entertainment have taken Miss SA to the next level,” said Sean Hoey of Dream Sets. “The technical team on this production have become a family over the years, and as for the Dream Sets crew, I’m very proud of them.” Eben Peltz, the Technical Director for this event, from Dream Sets said, “We loved working in this venue and the team delivered, once again. We appreciate the professionalism and absolute dedication of everyone involved!”.

LED screens took center stage at this production, and this was the largest wall the team at MGG had ever built. Instead of a continuous screen, Cutts designed “screen strips” which were positioned at different angles on the stage, while graphic content seamlessly ran across all the LED panels simultaneously.

“We used two 4K outputs with one Boreal running the 4.8mm and the other Boreal controlling both the 2.9mm and center LED screen,” said Botha. “Thanks to the Hippotizer it was so much easier to map the content. Yes, we had to cut up all the content and remap it but it was easy.  When we switched on the LED screens for the first time, the accuracy of the Hippotizer was phenomenal.”

Having used Green Hippo Hippotizer’s Video Mapper, the system was then connected to MA Net so that lighting designers Cutts and Siebrits could run the AV on the grandMA2 lighting consoles. “It worked like a dream,” said Botha.

“What I love about Hippotizer is that while it takes time to set up, in the end it does not matter how complex or versatile a show may be – everything is just simplified. We could run the system without a worry.”

He added the 2 machines worked together perfectly and the frame accuracy was fantastic. “We were happy with the Hippotizers which kept up with all the content,” commented Andre Siebrits from Visual Frontier. “When you chose a look, it was there immediately.”

Botha and Parker received Green Hippo training with Suzy Stenning at DWR Distribution prior to the event, during which time they started receiving the brief, designs and drawings for the Miss SA pageant. “It worked out perfectly as we could sit down and discuss any issues with Suzy and Dylan Jones from DWR while we were there,” said Parker. “When we had a few issues, we could fault find and come up with solutions.”

As for the Absen panels, they arrived in the country prior to the event, and the team at DWR, who are distributors of the product, worked tirelessly through the night to test panels and cables while the company’s Bruce Riley visited the venue to ensure colour calibration of all the screens used for the production as a whole.

“The 2.9mm panel has a very high pitch and is delicate which meant we had to handle them with care,” explained Parker. “The pitch is a lot smaller than other LED screens, but the quality on stage is unparalleled. The great thing is that we could clip the two panels (2.9mm and 4.8mm models) into each other as they have the exact same frame.

“I am very excited. It’s something new, and besides being one of the largest walls I’ve worked, the LED is a higher resolution and this technology has raised the bar in our field. It’s very impressive. It was hard work setting up for three days but then you stand back, take a look, and think in amazement, our hard work has paid off.”