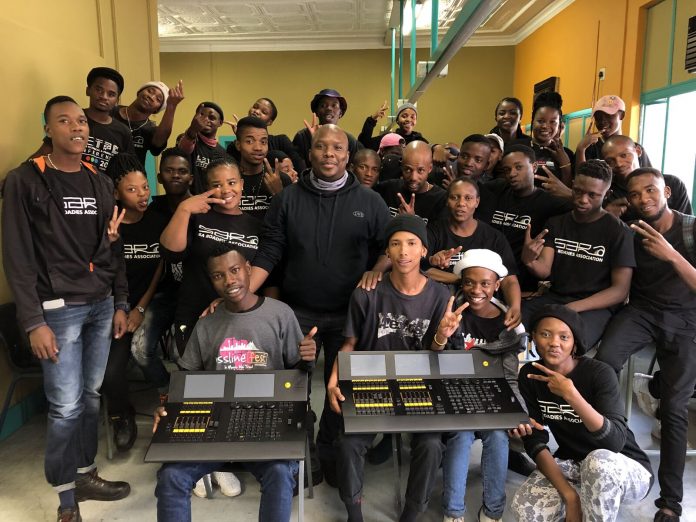 The entertainment industry in South Africa is always growing and DWR Distribution is and will continue to be a part of that process, it is this passion for continual development that drives the industry forward.

The South African Roadies Association (SARA) is of critical importance in terms of the future of this industry in South Africa. DWR and SARA share the philosophy that great training and instilling a passion in the youth is vital to success and growth of the South African entertainment sector and this is why the training hosted by SARA and provided by DWR is a priority to both institutions.

The training that took place over the 9th and 10th of April was aimed at exposing new SARA trainees to the dot2 as well as exploring deeper topics for those familiar with it. The class was headed up by Olebogeng Boinamo, who was keen to impart his knowledge and skills with those in attendance at the SARA training. The trainees were a group of mixed levels of experience, and Ole says the challenge to both teach to new and developed students was fun because it helps to put things in perspective for both him and the experienced students whilst teaching newer trainees.

There was a difficulty level for everyone in attendance, offering an opportunity to learn and grow. Freddie Nyathela, the president of SARA is always keen to celebrate his students. He says that the class consisted of 35 students who attended the previous class offered by DWR which points to a demonstration of the demand and success of the role training plays in shaping the industry.

In addition to the returning students, the excitement brought along 5 new students who heard by word of mouth that DWR class is great for the enhancement of their skills.

Timing is always crucial and Mr Nyathela elaborates that the dot2 training came at an incredibly useful time. “The training itself came at the right time where the students were introduced to new technologies,” he says and then adds that the students “were highly motivated” and open to the skills they were gaining.

The students were enthusiastic and Ole said “It is great to see young faces so enthused about this industry. They were ready to ask questions and weren’t shy about asking in-depth questions.”

Ole made use of “code-switching” a teaching technique that involves going back and forth between different languages in order to create a sense of intimacy and understanding, especially to those who don’t practice English as a home language. “When the students heard their mother tongue being used to teach they opened up more”, Ole confirmed.

The training comprised of learning the dot2 console and the PC system including; patches, user profiles, presets, effects and back up. Every student got their chance to interact with the console on a level they were comfortable with.

The industry is growing and SARA and DWR are proud to say they contribute to this. It is the shared belief in the people and the future of this industry that prove to be most important in shaping it to become better and better. The positive feedback from students has only reaffirmed the value that education has on the growth of the industry, ensuring the future to be bright.