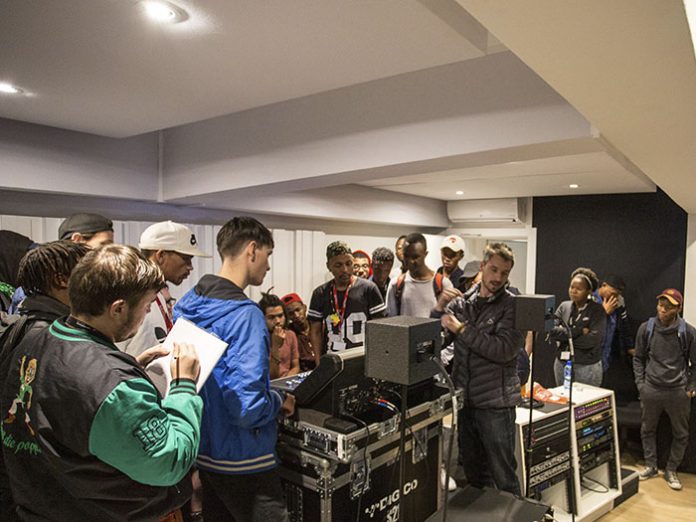 The Academy of Sound Engineering Cape Town, is a tertiary institution for the entertainment industry. They teamed up with DWR Distributions, a sound and lighting distributor from South Africa, for an Audio Workshop to give the sound engineering students exposure and practice on some of the industries higher-end gear like L-Acoustics, DiGiCo and Audix.

“ASE Cape Town lecturers are all active industry professionals; this keeps them engaged with technological developments. Basically, we are massive gear heads which is the reason we want our students exposed to some of the great products that a company like DWR distributes”, said lecturer at ASE Cape Town Gaston Roulstone.

Jaco Beukes from DWR Distribution went to the Cape Town campus to give the students some “play time on some of the best toys”. “Before I began my portion of the workshop, I had the students set up the audio equipment with some real-life scenario problem solving and troubleshooting”, said Beukes. The result was a DiGiCo SD12 and S31 connected by a stage rack monitoring the L-Acoustics Syva and 5XT’s. This was the loudspeaker for the Audix Microphones on a drum kit. “I wanted to show them what this gear they could do,” said Beukes.

Roulstone was most happy with the workshop stating: “It was wonderful for our students to get the chance to set up and listen to the latest L-Acoustics PA system with a top end DiGiCo mixing console and a drum kit surrounded by Audix microphones. Allowing them to record and mix the drum kit gave them the opportunity to not only utilize the products but also to hear the various results from source to the final mix”.

Marlene Riley, a sales representative from DWR Distribution, who was responsible alongside Roulstone for the organization of the workshop said: “It’s really important to do these things, for the youngsters to get some hands-on experience to give them a look at what is out there in the real world and I hope we can branch this out to reach more students in different colleges in the future”.

Jannie de Jager from DWR Distribution also went down to give a talk on the basics of lighting, “when the students graduate it benefits them to know the basics so when planning a show alongside the lighting designer, they can be equipped to handle the real world”. Roulstone elaborates as well saying, “We have become more aware of the need for our third year live sound elective students to be trained in lighting. We are always looking to ensure our graduate students are highly sought after in the industry”.

The “feedback from the students was excellent” and the workshop proved to be a big success for the students of The Academy of Sound Engineering Cape Town.