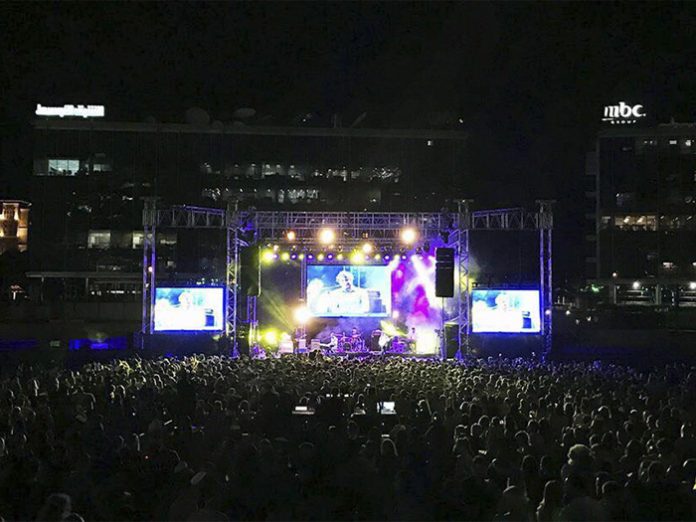 eclipse supported the ultimate celebration of all things Irish, at the McGettigan’s Paddy’s Day Party, by providing audio solutions to the full day of live music, award winning food, and of course, the sunshine.

With a very limited time frame for planning and preperation, eclipse provided a compact, full-coverage setup to the green grass of Dubai’s Media City Amphitheatre.

“We made a last minute decision to bring eclipse on to do the audio for our Paddy’s Day event at Media City.” commented Greg Dufton, Managing Partner of DGT events. “Having already been confirmed to supply the power weeks before, the team only had several days to prepare the audio. Despite the time constraints, eclipse turned the job around and delivered the audio and power with no issues. With 8,000 people attending we were very happy with the result and all international acts commented on how professional the audio was. As a regular supplier of ours, we look forward to working with eclipse on our next event, DXBeach.”

In addition to supplying the Paddy’s Day Party with an impressive audio system, eclipse also mixed five acts of the night, including the Stars of The Commitments, with eclipse’s own Tariq Al Hassan and Wissam Shaheen at the helm.

Wissam Shaheen, eclipse Staging Services’ senior audio engineer, commented, “The coverage was excellent, and we utilised the usual superb quality of the J series in its full glory. Despite the obvious, but the welcomed difference in the weather, I think it was a great way to ‘celebrate all things Irish’.”