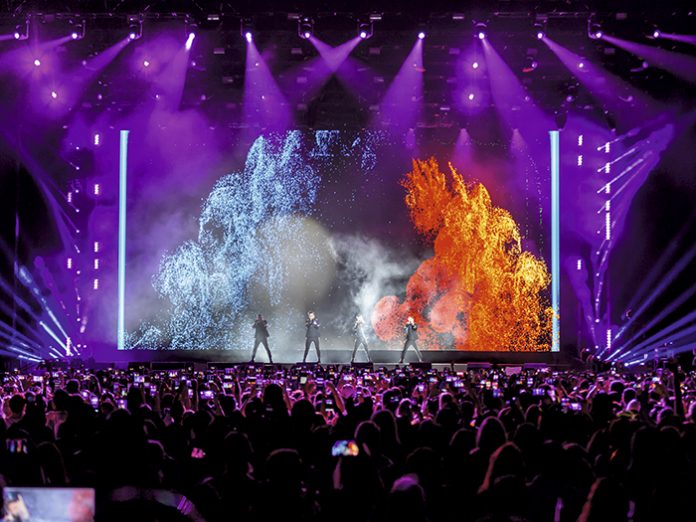 Marking two decades since the band’s formation, Westlife descended to Dubai’s Coca-Cola Arena to perform their Twenty Tour with the audiovisual support of eclipse. Capable of designing and implementing a full event technical package at the largest indoor venue of its kind in the region, eclipse was appointed to provide the audio, video, lighting supply as well as the rigging support for the event presented by Live Nation Middle East.

The concert saw eclipse bringing a full technical production into the Coca-Cola Arena for the first time after having worked at the venue before for Russell Peters’ Deported World Tour where the company supplemented the in-house audiovisual equipment. Commenting on the importance of planning and preparation in the pre-production stage, Mark Ross, Project Manager at eclipse Staging Services said: “Everything is prepped in the warehouse. Our goal is to move as close as possible to plug-and-play when we arrive on site – all we should be doing when we’re setting up is build, then fine-tune. It follows that your troubleshooting would be minimal.”

The audio department opted for a fully ArrayProcessed d&b audiotechnik loudspeaker system. The main PA comprised 12 J8s and four J12s line arrays per side for uniform coverage of the entire 17,000-capacity indoor venue, together with two hangs of eight J Subs for low-frequency propagation. In combination, 16 d&b V8s and eight V12s were flown as out-fills across the stage’s edges to cover the raised seating area, while on the floor six J-Infra Subs were installed in a sub-array configuration with eight Y8s for the front- fills, all driven by 34 D80 amplifiers. A DiGiCo SD11 console was employed for control and a DiGiCo SD7 was at the helm at FOH position for Westlife’s FOH Engineer while a DiGiCo SD12 was utilised for monitors, covered by Meyer Sound MJF-212A wedges.

Using d&b’s system prediction software (ArrayCalc), the audio department produced insightful analytics detailing the sonic coverage of the venue ahead of the show, though allowing for minor adjustments to take place on-site, if required. eclipse Staging Services’ Senior Audio Engineer, Wissam Shaheen noted: “We had sufficient information to put a thorough sound system design in place. After conducting a number of site visits, we acquired a precise technical drawing of the venue, and the step after that is fulfilling the band’s technical rider.”

Whilst the Coca-Cola Arena is purpose-built for a concert venue with the most awe-inspiring facets, installing an extensive audio system presented a set of challenges to ensure that every element is delivered with precision, accuracy and clarity.

Shaheen explained: “It’s absolutely a fantastic venue; one of the best I’ve worked in. What we want to achieve is for everyone in the audience, no matter their position, to have the best sound experience possible. Large venues come with a fairly big acoustical footprint – and this means you get reverberations from all sorts of reflective surfaces as the sounds bounce off the walls and wooden structures, chairs, glass and even the floor. However, the precise d&b loudspeaker system was able to avoid them quite nicely and focus the energy where needed.”

Shaheen furthered: “We delivered a tailored solution that followed an initial brief to provide a full audio setup, offering the best acoustic performance possible. It’s been a pleasure to work with all the touring crew and the team at the Coca-Cola Arena throughout this project, and we look forward to continuing to work with them on future events.”

For the lighting system, eight truss mounted Lycian followspots were used; four on the front and four on the back, combined with 48 Robe Robin BMFL Blades and 32 Claypaky Stormys. The floor package featured 16 Claypaky Mythos 2s and 10 Martin by Harman MAC Auras. Either side of the stage, two 9m towers were illuminated with 32 Chauvet Professional COLORado Batten 144s with 20 Claypaky Mythos 2s rigged at intervals in between. Control and networking were run off two MA Lighting grandMAs utilising Luminex GigaCore 16RFO switches.

“All these fixtures were specified by the tour during the early design stages,” commented Sam Connolly, eclipse Staging Services’ Senior Lighting Technician. “We had to ensure that the design meets the technical specifications and tailored in a few alterations to fit into the venue, but we were able to provide exactly what was required to keep almost the same look and feel to the show as when it tours in countries around the world.” The 9m towers were the most challenging part of the install.

Connolly elaborated: “It was crucial that the measurements were exactly correct and aligned with the truss beams. All the units are pixel-mapped through the lighting controller, which allows the FOH to change colours and create dynamic moving effects for the show. While the rest of the setup is relatively standard, the towers are something a bit more complex and well worth the extra effort and attention when you look at them.”

On the video side, eclipse utilised the in-house IMAG screens displayed on either side of the stage. The set design featured a large upstage 4.8mm LED screen at 17m by 8.5m totalling 3,536 by 1,768 pixels, displaying a mixture of live camera feeds of the on-stage action and various pre-created creative visuals provided by the touring company.

Richard Bearpark, Head of Video at eclipse Staging Services, remarked: “We purchased the screen about six months ago and it’s brilliant. All of the video signal is being processed by an Analog Way Ascender 48 switcher fed by four processors, and a further four processors for backup. Our video processing is at the back run via fibre, receiving the images that need to be mixed to either the side IMAG screens or the main screen.”

In conclusion, Ross commented: “We are incredibly proud to have been a part of this show, ensuring that it ran smoothly and without any technical glitches. It’s been great working with Live Nation Middle East, the Coca-Cola Arena and the touring crew, combining our expertise to create something truly special which has proven to be a great success.