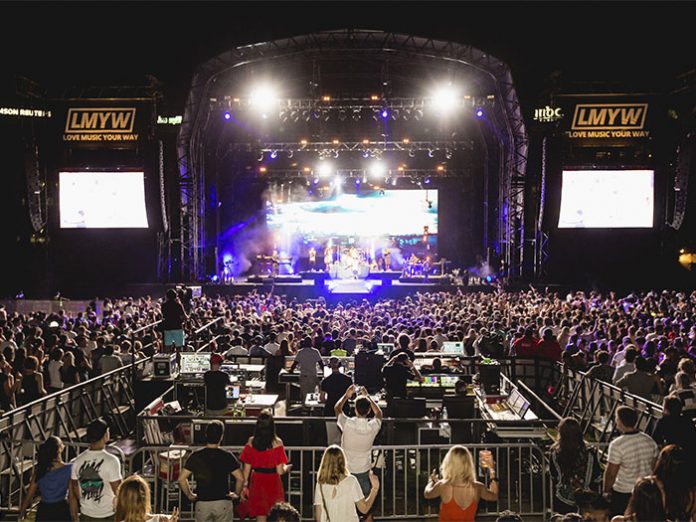 Co-headlining the last festival of the season were Rudimental and Disclosure with supporting performance from Bipolar Sunshine, Ms. Dynamite, Jasmine Thompson, DJ Charlesy and Hollaphonic to name a few.

To accommodate the stage lighting, video, audio and lasers, the eclipse power department supplied three 350 kva synchronised generators. In addition, one 350 kva and two 200 kva generators were provided to power the entire Dubai Media City Amphitheatre site, which included the artists’ village, VIP stand, F&B areas, market areas and all entrances. Over 12km of cable was distributed around the venue, ranging from 16a single phase through to 240mm powerlock.

In terms of video, the eclipse crew supplied a nine mm LED upstage screen measuring 14m by five metres along with two IMAG nine mm LED screens measuring six metres by 3.6 metres, finished off with a nine mm LED DJ booth surround. All of which was driven by two Green Hippo TAIGA media servers which meant the team were able to be as flexible as possible as they were able to run one system to cater for all the performers’ requirements.

During the planning stages, the lighting crew utilised its new WYSIWYG suite to pre-visualise the event and give the client detailed and precise drawings to cut down on on-site time, making the whole pre-production process easier and faster. Jonny Gaskell, Rudimental’s Lighting Designer and winner of a prestigious Knights of Illumination Award commented: “Having arrived on site at two am straight off an international flight from the UK, it was fantastic to arrive to a fully functional, well-crewed system.” He continued: “The crew really helped an incoming LD get the end result you are after with the minimal amount of effort as they were able to pre-empt what it is you are trying to achieve before you ask for it, thanks to you all, it was a really enjoyable couple of days.” Supplying over 140 fixtures including a number of Clay Paky Mythos, Clay Paky B-EYE and Martin Mac Viper Profile with a MA Lighting GrandMA2 Full size and GrandMA2 Light for control, senior lighting technician, Craig Ralph had lots of choice when it came to programming and operating the lighting for all the supporting acts.

“Attention to detail is everything in this type of event,” said Head of Audio, John Parkhouse. With a main system of 16 d&b J-Series per side, 16 J-Subs plus six J-Infras in Sub-Array, a further eight Y-Series for the front fill and finally four V-Subs with eight V-Series per side for the out fill, it was a d&b Audiotecknik fest.

For amplification, the crew deployed 24 D80’s and two DS10s for system feeds with primary and redundant backdrop. Rickey Ricketts, FOH Audio for Rudimental commented: “Having a d&b audiotechnik rig made me very happy as I am a big fan which made my mix very easy to do.” For control, the crew provided a d&b audiotechnik R1 running on Mac Mini and Lake LM44 system control running on Surface Pro tablet, Smaart Live running on MacBookPro with earthworks M30 analysis mic. The digital audio signals were fed to the LM44 system via AES, the signal was then sent to the DS10’s on stage via Dante, then to the D80s via AES again. Fully digital from source to destination. Mr Ricketts goes on, “The PA was set up in such a way, that I didn’t have to do much on my graphic. Looking forward to coming back in the near future and to work with you guys again.”

eclipse audio also provided all FOH/Mon consoles, monitors and RF requirements except for Rudimentals drive rack and RF which the touring production brought along with them. Parkhouse concluded: “We know that when touring productions come in, the more relaxed and on top of their requirements we are, the easier their day will be and in turn the focus becomes on the important factors of tweaking everything to perfection. The LMYW festival was a great show to work on, where once again the audio department were given the opportunity to prove that we do attain a world class delivery and level of service, something which we concentrate on heavily.”

“This event marked another successful delivery by the whole eclipse team. The scorching hot conditions were made bearable by the positive attitude shown by the entire crew and each of the production teams that we had the pleasure of working with over the weekend, and hope to see back in the UAE soon,” concluded eclipse Staging Services, General Manager, Martin Lubach.