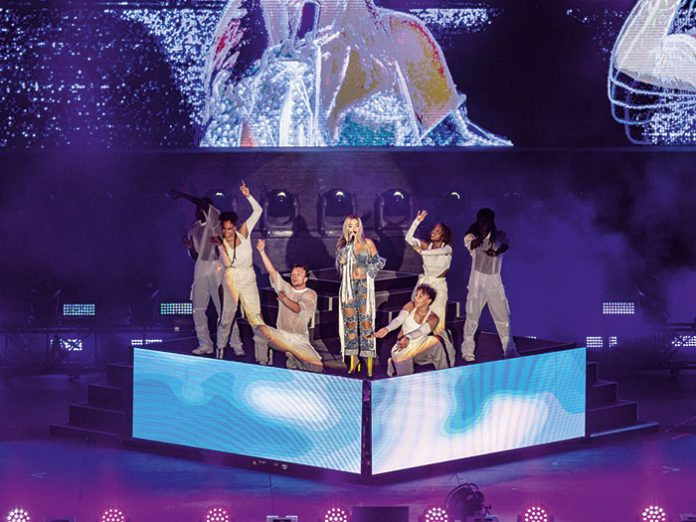 eclipse provided a full technical supply to Wake Up Call, bringing artists including Rita Ora, Disclosure and Rufus Du Sol to the shores of the iconic Palm Jumeirah at the W Dubai – The Palm for the three-day luxe music festival. Previous renditions of the event were held at the W Hotels in Los Angeles, Barcelona and Bali, each boasting star-studded line-ups. The event, produced by IMG Live for Marriott International, was the second venture that eclipse joined forces with IMG Live for, following Gwen Stefani’s concert at the grand opening of the Renaissance Downtown Hotel in 2017.

Overseeing the delivery of all of the technical elements was Project Manager Duncan Shortt, eclipse’s Head of Project Management. With the open-air festival taking place on the beachfront of the hotel, working on the venue site posed somewhat of a challenge. Having designed the production aspects through WYSIWYG after his initial site visit, Duncan commented: “While we are used to the working conditions that a beach environment presents, the main challenge was realising that there was a 2m drop-off from the high end of the beach down to the water line, and at high tide there was 6m worth of stage in the water. We ended up building to about 26m wide. We had to consider that the water would be coming up higher than where you want your sub-array to be, in between the PA towers. This meant we had to build a shelf that was higher than the water level for the subs to sit on.”

eclipse delivered an ArrayProcessed d&b audiotechnik audio system, with 10 J8s and two J12s per side, reinforced with a ground stacked sub array consisting of 12 J-SUBs and 6 J-INFRA subs, with an additional four d&b Y10Ps used as front fills. Delay towers had six V8s and two V12s hung per side. All powering and processing came via 26 d&b D80 amplifiers along with three Lake LM 44 and two d&b DS10 processers. For on-stage monitoring, four d&b V-SUBs with four d&b V8s as side fills and two d&b M4 wedges were the order of the day. Monitoring was done via a combination of Shure and Sennheiser IEMs.

At FOH and at monitors, control was via an Avid S6L and a DiGiCo SD10 respectively for Rita Ora, and a pair of Avid Venue Profiles for Rufus Du Sol, in addition to a DiGiCo SD8 for Disclosure’s FOH control as well as the house DiGiCo SD11 used for playback. Tariq Al Hassan, eclipse Staging Services’ Senior Audio Engineer commented, “All three main consoles were matrixed through a DiGiCo SD-MiNi Rack, which was controlled by the house DiGiCo SD11. We gave the engineers a direct connection to the PA, making it possible for them to line check while another act was performing, with no interruptions.”

Addressing the inherent logistical challenges of setting up the PA system on the beach, eclipse Staging Services’ Senior Audio Engineer, Wissam Shaheen added: “It was quite a narrow beach at just 26m wide, which was essentially as wide as our sub-array, so you can imagine the sheer power from the sub, which also covered the raised VIP platform to the left of the house. The only tricky part in terms of PA was the 2m beach slope, resulting in house right being lower than house left. Clearly, we couldn’t lower our right PA – it wouldn’t look right and would sound unbalanced – so we fed that information into the ArrayCalc simulation design software and d&b’s ArrayProcessing took care of the rest and evened the sound out across the venue.”

The rigging team hung all the LX trusses, spreader trusses for moving lights at the main stage and provided the truss for the video screens together with PA hangs on the delay towers. Plenty of lighting equipment outfitted the main stage to please the eye during the live performances and DJ sets. The rig included 16 Claypaky A.LEDA B-EYE K10 LED Washes, 20 Sharpy Wash 330s, 30 Sharpys, and 14 Stormy CCs. These were joined by 19 Martin Mac Viper Profiles, 26 SGM P-5 LED Washes and eight FOH-rigged Robe Robin BMFL Blades, providing ample brightness for front lighting.

The entire programming of the system was controlled by three MA Lighting grandMA2 consoles – one full-size and two light models as per rider. On the floor, three different packages were provided for Rita Ora, Rufus Du Sol and Disclosure. Geno Welburn, Senior Engineer commented: “For Rufus Du Sol, we had the Mac Auras shining through the see-through perspex risers, which created some really nice effects.”

Speaking about the challenges, Geno commented on the weather during build-up, “We did get some torrential rain during setup, but on the show day it was cleared, and the scenery was absolutely beautiful.” Moreover, on the visual side, Rita Ora’s energetic performance was highlighted by a range of special effects including Galaxis G-Flames, Showven sparkulars and Magic FX Co2 jets with the support of Stage FX, while Laser FX delivered the lasers for Rufus Du Sol.

In terms of video, eclipse supplied an upstage central screen of DC 4.8mm LED panels measuring 14m wide by 4m high, and a smaller 13.2m by 1.8m banner of ROE 9mm LED screens installed above the central screen to run visuals. A further 6.6m by 3.6m IMAG relay located behind the FOH tower was deployed to give the rest of the beach and the audience reclining on lounge furniture at the rear of the venue a clearer view of the stage. The video supply at the Wet Deck comprised a ROE 9.6m by 1.2m LED screen at 9mm pixel pitch that resided in the DJ booth. Content for the main screen, DJ risers as well as the Wet Deck, banner and relay screens was run by two Green Hippo Hippotizer Boreal V4+ media servers.

Jake Pettit, eclipse Staging Services’ Senior Technician commented: “It was the first time that the screen has been rained on, so it’s a sigh of relief to know that it’s waterproof.” Richard Bearpark, Head of Video at eclipse Staging Services added: “It is the same screen we used for Westlife. Ahead of time, we sent detailed drawings and video schematics to the touring crew, so they knew exactly what it would look like, and how they will integrate with our system. We gave them pixel maps of exactly how the LED screens are mapped, so everything was sped up and ran very smoothly on site.”

Delighted with how the show came together, Duncan concluded: “I’m really pleased with how close the final build was to the initial drawings. The hotel and the incoming touring acts couldn’t be happier with the result. They loved the PA and were incredibly easy to work with.”