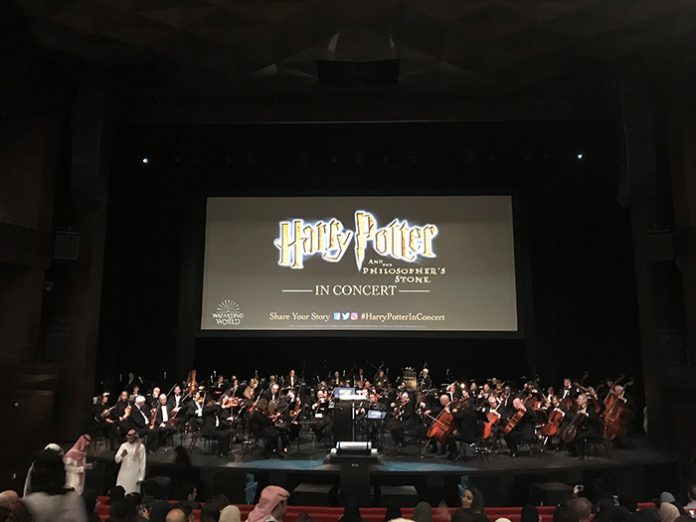 eclipse Staging Services provided a complete technical support package to Blink Experience for the National Symphony Orchestra in the performance of Harry Potter music live to film. During the concert held at the Ithra Theatre in Dhahran, Saudi Arabia, music from the Harry Potter movie played with live orchestral accompaniment while the full-length film projected on a big screen behind the orchestra.

As the full-service technical supplier to the event, the remit involved providing the sound, video and lighting alongside the rigging and power supply for what was the first cinema-orchestra performance in the Kingdom. With the National Symphony Orchestra leading the performance, the production had to be acoustically detailed and the delivery flawless.

As a result of having worked with the client on various projects in the past, eclipse’s help was sought on all technical grounds. eclipse Staging Services’ Senior Project Manager, Tom Warneke commented: “Our long-standing client, Blink Experience, knew of our standard, calibre and capabilities and once again, brought us on-board to help.”

Warneke provided his insights as to what was different about this production. “This show was unique as it involved close-micing a complete orchestra, similar to what you’d do for recording or broadcast, and producing a live orchestral performance alongside a blockbuster film,” said Warneke. “It was also the first time this kind of event has ever happened in Saudi Arabia.”

The project utilised the in-house lighting system such as the GrandMA2, the Martin Mac 700, and the Philips Vari-Lite VL3500 as well as the theatre’s automated fly system. In terms of video, the eclipse crew supplied projection and content servers for the film as well as a custom rear-projected screen surface using 2 20K Christie J Series projectors.

The audio element consisted of a combination of d&b V-Series systems, controlled by the DiGiCo SD5 mixing console. The main PA system consisted of 1 V-Sub, 6 V8 and 4 V12 loudspeakers. Moreover, the system comprised 4 V8 placed in as front fills with 1 M4 handling the centre fill. The audio department also deployed an array of 8 V-Subs. The audio supply called for one Senior Audio Engineer, one Senior Technician along with a crew member on the show.

To complement the film’s soundtrack, the audio realm saw the close-micing of an 80+ orchestra, recorded with a mix of Schoeps microphones, as well as control and monitoring. The installation was the first use of the Array Processing (AP) technology in Saudi Arabia. Commenting about the redefined live experience in the rapidly opening market, John Parkhouse, Head of Audio at eclipse Staging Services said: “The Ithra theatre was quite interesting from a purely system design perspective. A relatively short throw but large vertical coverage meant in the planning stages we could be quite demanding of the d&b Array Processing (AP) feature. The flown systems splay angles were set to cover three tiers precisely at the seated audience and mechanically avoid reflection potential which resulted in a quite unconventional array shape.”

Parkhouse further explained: “With the AP emphasis set to ‘full glory’ the targeted frequency response and level over distance produced one of the cleanest AP scenarios that I’ve seen. I’m also happy to say we are the first people to ever supply a d&b Array Processed system in KSA in the same way that we did the first in Dubai in 2015 for Dubai Music Week. Taking the extra time and attention required for running the system this way demonstrates our commitment and dedication to always providing the best possible experience for all attendees.”

Tariq Al-Hassan, Senior Audio Engineer who oversaw sound on this project recalls, “We spent a good amount of time on load-in, aiming at an extremely precise mechanical accuracy to the ArrayCalc simulation software. After alignment and tuning with R1 and Smaart, we achieved a smooth sounding and even covered system in Ithra Theatre from the front row to the back of the third tier.” He continued: “Array Processing really came into its own here; the results were startling in this scenario. We were extremely happy with it.”

He further added: “It was a pleasure to work with my fellow colleagues Tim, Sajid and the whole team, including the theatre staff who were extremely helpful, and also Blink Experience as the client. I believe everyone was over the moon with the results and I hope we do more movies, there is seven more to go!” Tom continued: “It was a great experience to be part of the first event of its kind in the Kingdom, being able to bring such a well-known family film to life for so many and be part of a production that we hope is the first of many more right across the Kingdom. Our kit and crew contributed greatly to the success of this show by providing a first-class production.”

“When working on an event such as this where the product is so well known, everyone in the audience is acutely aware of what it’s meant to look and sound like; we were core to helping Blink Experience and the film studio adhere to their vision to give the audience the best possible experience,” he concluded.