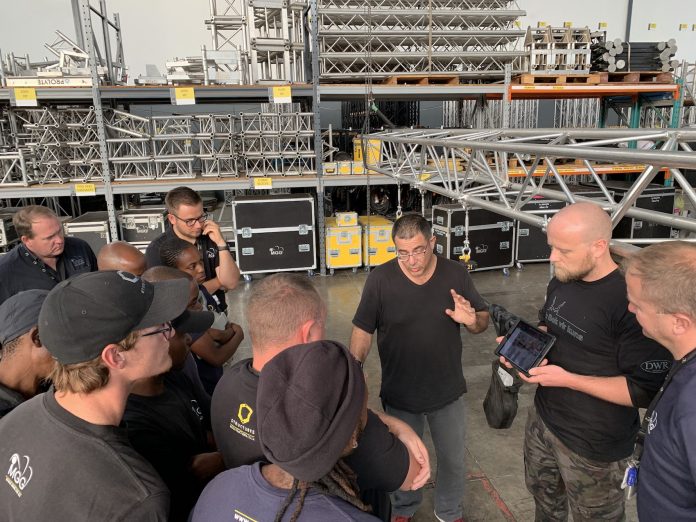 As live production stages get bigger, heavier and more complicated with equipment suspended above the audience, safety is imperative. Ilan Bahar from Eilon Ron StageMaster recently visited South Africa, and in conjunction with local distributor, DWR Distribution presented load cell demonstrations to a variety of rental companies in Johannesburg, Cape Town and Durban.

Eilon, a family business, was established over 40 years ago and their safety monitoring systems are used in diverse applications including entertainment stages, aerospace with sales to NASA, wind turbines and shipment weighing to mention a few.

“The Eilon Ron StageMaster concept is very simple,” said Ilan Bahar. “When you hang equipment above people, you have to know a load of every point because there are limitations, such as the limitations of a roof. You have to make sure that you don’t cross those limitations and that is what the load cell does. It measures the load at every point, sends the data to the receiver and then you have it on a display where you can continually monitor the status.”

Each time there are more than two supports on a truss or more than three supports on a structure, a statically indeterminate loading condition occurs, which results in loads being distributed on a structure that is extremely difficult to predict. Day to day reality is complicated due to this statically indeterminate loading phenomenon: It misleads us into believing a horizontal truss distributes loads equally, while often one or more supports are overloaded. This situation is dangerous and should be avoided at all costs.

“Before people used the load monitor, they would make calculations, but even if you are in a position where everything is stable, once you hit the controller, everything changes. The Ron StageMaster system helps to verify the plan and is also a second defence layer: First is the load calculation plan, and second is a realtime verification that the calculated loads are similar to the measured load. Both layers are necessary in order to provide effective overload protection.”

An accident is a meeting point between the unexpected and the unprepared. “There is nothing you can do about the unexpected. You don’t know when it will happen, how it will happen or where. The only thing you can do is to be prepared. If one part of the equation is in your control the chance that you will have an accident is much lower,” he explained.

“If, for example, you are in a car, driving carefully and there is an accident, you will be secure if you are wearing a safety belt, there are airbags, and you are in a reliable car where you can trust the brakes and safety features. If you are driving an unreliable car with poor breaks, no safety belt, and airbags that don’t work well, you are at a higher risk of getting injured or losing your life. The great difference between driving and working in the entertainment industry, however, is the number of people that could potentially be hurt.”

Every company setting up equipment in a building has a responsibility to adhere to safety measures. To customers who have invested in the system, it’s the peace of mind knowing they can follow to the highest possible safety standards.

For Duncan Riley of DWR, the load cell demo was an enormous eye-opener. “We were very proud to introduce Ron StageMaster to South Africa for the first time and Ilan was down to earth and built good relationships with our clients. This was an educational experience and it actually makes you scared to rig above people’s head without actually knowing weights.”