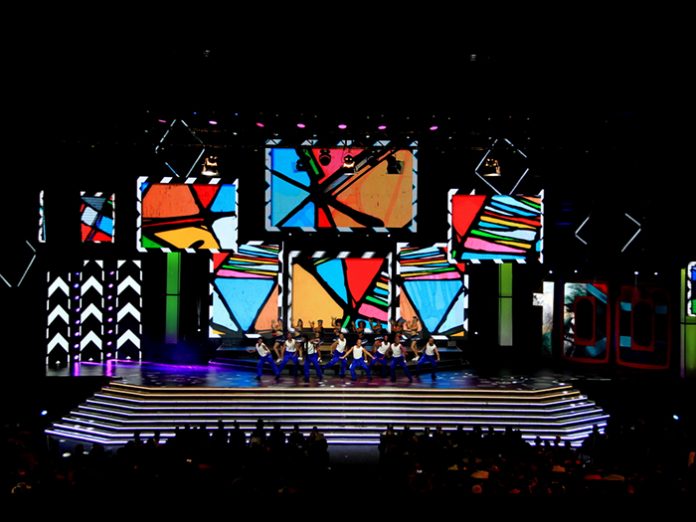 EPH Productions were appointed by ATTV to supply the full technical and the dazzling set for the show, as well as for the smaller Technical Awards held a couple of days prior to the main event.

EPH Production’s Danie Janse van Rensburg wore 3 hats namely as Project Manager, Technical Director and Set Designer. For the proposal, with a lot of support from Leon Pheiffer (CEO, EPH Group), they came up with an idea to use cleverly suspended LED screens as the main feature, knowing that when complimented with the graphic material supplied by ATTV (Andrew Thabo Television), diverse looks would take the audience on a journey from glamour to triggering emotions with bright and patriotic colours. A special screen, in remembrance of former South African president Nelson Mandela, marked the centenary of the legend’s birth.

The show was designed for camera. With years of experience in the industry, Janse van Rensburg is a bit of a dreamer and has done it all from bass guitarist to theatre technical to acting. He loves his work and creating magical experiences: “You start with an empty page in a way,” said van Rensburg. “I usually look around to see if there are any ideas that would work. I’m also a relatively practical designer. When I design I look at the audience, the camera and what equipment is available. You have to work within budget and parameters.” With the television audience in mind, he had to consider which screens would fit the camera better. “The technical team did an awesome job and worked endlessly to get it right. The way everything came together was brilliant.”

9 LED screens were hung on motors while 2 automated screens at the back of the stage closed to create a 7m x 3m screen. When the screens opened, serving as an entrance for artists to walk onto the stage, an additional 5m x 3m screen was revealed in the background. “Spacing was the biggest challenge and next was to produce a uniformed yet not symmetrical look,” said van Rensburg. To do this, he positioned the screens at different angles. “It gave a more natural appearance without being too rigid. It offered extra depth and created a 3D feel.”

The set included a 300m and 600m level used for the choir and dancers, and steps which were lit up with LED strips. An artist hand-painted a SAFTA watermark logo on the stage floor, which was highlighted during the production.

To light the show, van Rensburg called on the services of Kurt du Preez of Pan Tilt. The pair had worked together before at the SA Sports Awards: “I knew Kurt was a good television lighting designer and he fitted the profile for this event.” An added benefit was that du Preez had worked at the Super Bowl earlier in his career and knew the venue well.

“The concept of all the screens at different angels was difficult, because where do you put the lights?” teased Kurt du Preez. Up for the task, he allocated positions for the lighting beams to punch through. “I tried to keep the lighting fixtures off the stage floor because of all the moving screens and the band trucks. It was great to work with director Eugene Naidoo again. Andrew Tim from ATTV was also inspiring. Andrew really tries to push the effects and theatre side in television productions, so we spent a lot of time rehearsing, trying to get it right,” said du Preez.

The lighting rig consisted of 140 fixtures in total. “The Robe BMFLs were awesome. I used 2 as followspots and I will definitely do that again! I had another 10 to lift up the audience for the awards and for reverse shots – they worked like a bomb.”

A full MA Lighting rig, running of a grandMA2 lite, was in control. “For the first time I used Elation Nodes and it was the first time that I got ArtNet to work on MA,” said du Preez. “It was interesting, it worked and there were no issues. I had about 10 universes, so it was very stable.”

As a freelancer, lighting consoles are always supplied to du Preez by the client. “MA is simple. I start my show from scratch every time, and even though I’m not sure if I’ll be getting a full size or ultralight, it’s putting the memory stick in and you’re ready to go. It’s the confidence that everything is going to work,” he said.