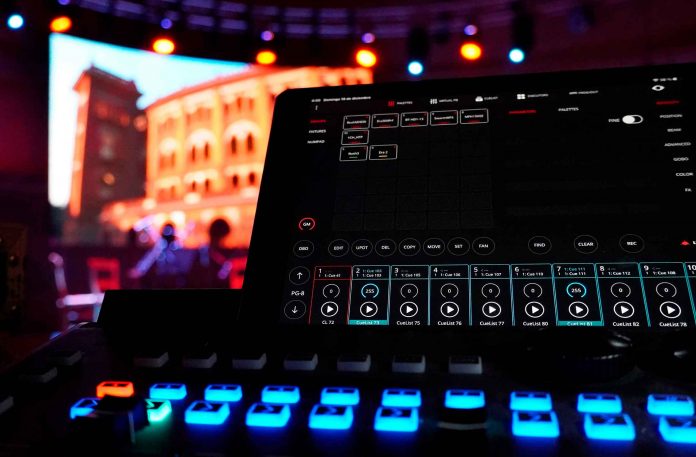 Equipson’s LightShark range has been used for DMX control at the Spanish and Angolan pavilions at Expo 2020.

“The software’s FX engine allowed us to integrate the lighting with the rest of the audio-visual systems in an agile and simple way,” commented Marvin Ryan, Head of Lighting at the Angola Pavilion.

His views were reinforced by Juan Gonzalez, Technical Manager for events at the Spanish pavilion, who highlighted the simplicity of LightShark’s user interface. “With hardly any previous experience in handling the system, it was very easy to start operating it almost from day one,” he reported.

LightShark’s range of multiprotocol products allow lighting engineers working in all types of venues – from small theatres to large stadia – to control up to eight DMX universes and 4,000-plus DMX channels, all completely integrated via smartphones and tablets. In addition, the range is fully compatible with other manufacturers’ equipment because the products work with industry-standard DMX and Artnet lighting protocols, as well as any operating system.

The Angola pavilion’s central square features a Fantek stage where leading African artists host daily performances. Spanish company EIKONOS was responsible for designing and installing the pavilion’s technical and audio-visual infrastructure. “Having the direct support of the manufacturer from the early stages of the project allowed us to develop customised solutions that undoubtedly make the whole assembly easier,” said Project Manager, Andrés Aguerri.

His view was reinforced by EIKONOS Head Rigger Justin Abio, who added: “As well as Fantek’s light and resistant trusses, the company’s range of accessories and components allowed us to place each element, each projector and each spotlight in exactly the right place.”

Fantek products are also used in the Spanish pavilion, which highlights sustainability and the historical connection between Spain and the Eastern World. The multipurpose hall was built with Fantek staging and is being used for a multitude of corporate and business events. It is also the focal point of performances by prominent artists such as guitarists Miguel Trápaga and José Maria Gallardo del Rey, Quinteto Aulos, Artefactum, Rodrigo Cuevas and Mago Migue, among others.

“The flexibility of the Fantek stage system allows us to adapt the stage to the needs and requirements of each company,” said Juan Gonzalez, Technical Manager of the space.

Iber de Vicente, Head of Production of Cultural Activities of the Spanish pavilion, added: “Each country tries to show, through its pavilion, the best of itself and that also includes stage and audio-visual technology. Spain is proud to have the equipment of manufacturers such as Fantek and Equipson as part of its display.”