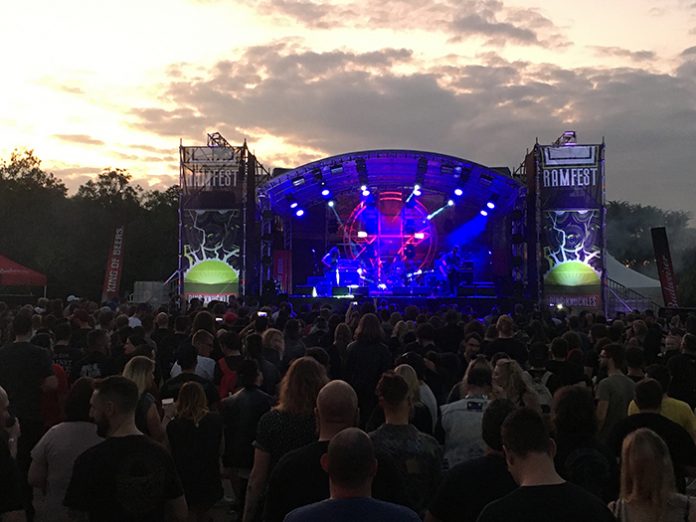 Just days before the global emergency that the Coronavirus pandemic reached South African shores, causing a national shut-down on all public events, thousands of fans gathered at the Voortrekker Monument in Pretoria to celebrate the 2020 edition of RAMfest, South Africa’s premier music festival for all things alternative.

This years’ line up included some of South Africa’s most popular alternative bands, including Facing the Gallows, Peasant, Man as Machine, Newtown Knife Gang, The Valley, Stoker, and Truth & It’s Burden, to name a few. Highlights of the event included a much-anticipated reunion show by South African rock legends, The Van Coke Kartel and USA-based death metal giants, The Black Dahlia Murder, who headlined the one-day festival.

Festival organisers Real Alternative Music (RAM) once again reached out to Stage Effects and Blue Array Productions to provide technical services for the event. Stage Effects’ Erik de Bruin has been working with RAM on the festival for several years and he said that it is one of his favourite festivals to work on.

In the lead up to this years’ RAMfest, de Bruin used the opportunity to give an up-and-coming young Lighting Designer, Ethan Benjamin, a once-in-a-lifetime chance to get behind a grandMA3 light console at a festival of this size. “A few years ago, I found this incredible young guy, Ethan Benjamin, on YouTube, who was making videos about his experience programming on the MA2 platform. I listened to his accent and realised that he was a Safar!” de Bruin explained. “I got a hold of him and discovered that, at the tender age of 16, he had taught himself how to programme an MA2 by following YouTube tutorials and online resources. I decided to allow him the opportunity to programme a few gigs over the past two years’ and have been watching him grow ever since!”

“Erik got hold of me the week before RAMfest and asked if I would be interested in doing the lighting for local alternative rock band Truth and It’s Burden’s RAMfest set,” said Benjamin. “While I have never listened to metal before, I was really excited to have the opportunity to work on a show of this size and jumped in with both feet!” he said. “The band were keen to experiment with timecoding the lighting for their set, and Erik felt that I was up to the task.”

Knowing that this was a potentially career-changing opportunity for Benjamin, de Bruin approached MA product representative at DWR Distribution, Jannie de Jager, and asked if Stage Effects could use the newly launched MA Lighting grandMA3 light console for the festival. “Ethan is a fantastic programmer, and I wanted to allow him to experience MA’s new console at an actual gig first-hand,” said de Bruin. “Jannie and the team at DWR are always happy to get behind projects that aim to empower young people in the industry, and this was no exception,” he pointed out.

Working closely with band members Ashley De Beer, Calvin Clayden, Sean Gaisford and Matt Sletcher, Benjamin managed to programme The Truth & It’s Burden’s 45-minute set over five days. Benjamin explained that because he would be timecoding the lighting for the entire set, the band gave him their setlist in timecode format on the Monday before the event. De Bruin recalled: “Ethan programmed the show on the MA2 platform and imported his show file to the MA3 light, which they ran in mode 2 for the show, demonstrating the console’s flexibility.”

Benjamin added: “In my opinion, MA Lighting is light years ahead of other console developers in their approach, and I am very excited to see how MA3 evolves over the next year or two. I was a little nervous at first, because Erik was putting a lot of faith in me to run a show at such a high-profile event,” Benjamin reflected in an interview after Truth & It’s Burden’s set. “However, I am very happy with how it turned out as both the band and the crowed responded well to the lighting during their set. This experience has only affirmed that this is what I want to do for the rest of my life!”

Following the show, Truth and It’s Burden published a heartfelt thanks to everybody that was involved in the event on their Facebook page, including a special mention of Benjamin. “We’d like to thank some very important people and companies for making RAMfest 2020 – Pretoria the biggest and best show of our musical careers,” de Bruin continued. “Special mention definitely has to go out to Ethan Benjamin, our main man responsible for creating a beautiful light show for us. This concept [of timecoding our lighting shows] will forever change how we approach live events. Thank you so much for making our dreams a living reality with your technical know-how and passion for creative lighting in a live environment.”

While young, Benjamin has shown that the technical events industry is a powerful vehicle for youth developing in South Africa. At the tender age of 18, he has already started his own production company, Shatter Productions, in partnership with Christoff Snyman, a freelance lighting designer and in-house programmer for the Baxter Theatre. He concluded: “We launched Shatter Productions in 2019 and we are hoping to grow together in the future.”

DWR Distribution congratulated the young LD. Duncan Riley commented: “The events industry has never before faced a challenge as global and traumatic as the lockdowns caused by the pandemic – and it is an important time for all to reflect on the lives that our industry supports and the contribution that we make to furthering the development goals set forth by the South African government and the world at large.”