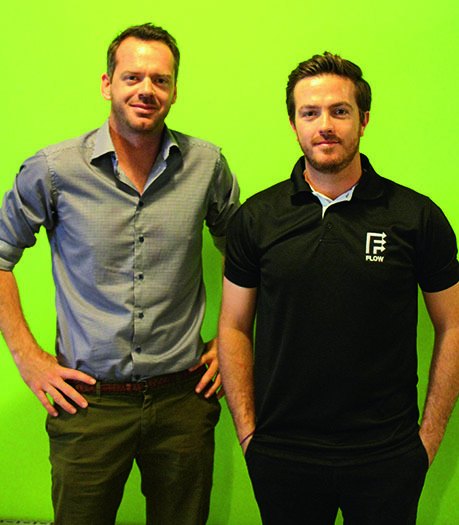 AFTER INITIALLY GAINING PROMINENCE AS A KEY SUPPLIER OF AIR COOLING IN THE UAE, FLOW AIR + POWER SOLUTIONS BRANCHED OUT TO ADD POWER AND DISTRIBUTION TO ITS OFFERING. TPMEA’S STE DURHAM VISITED FLOW TO DISCUSS THE COMPANY’S ACCELERATED EVOLUTION.

Visiting Dubai-based events companies quite often means having to leave the relative shade provided by the city’s looming skyscrapers and, while Flow Air + Power Solutions’ Jebel Ali headquarters is no exception, I was reassured by one thing – at the very least, the air conditioning would be good.

With the cool office climate came a warm welcome and a much-needed cappuccino, as well as the opportunity to sit down with Group CEO Alistair McDonald and General Manager Jonathan Calvert.

After being shown around the open plan inner sanctum (complete with staff ping pong tables), it is easy to see how the company has cultivated the creative and progressive mentality that has fuelled its rapid ascent.

NICHE WITHIN A NICHE

Having established in 2010 with the idea of introducing a brand of air cooling that was a little easier on the eye than the large-scale industrial units available at the time, Flow has since matured into a business whose success is rooted in a forward-thinking, dynamic ethos.

As well as planning to introduce a more refined aesthetic than its competitors, Flow began with the intention of improving the quality of service available to events clients, catering to a range of temporary structures and applications. McDonald, who is also Partner in structural solutions specialists Wicked, explained the company’s origins.

He remembered: “At the time, companies were not really catering specifically for the range of temporary structures – air conditioning was generally quite ugly and intrusive. This is fine if you’re providing your services for horses in a temporary stable, but not for the VIPs attending the polo.

“We had the idea to create a whole new company that specialised in cooling, rather than being a structural company with a bit of cooling kit. We set up separate offices, warehousing, and staff, just supplying a small amount of clients at first.”

Flow quickly gained in popularity and, as it acquired so much power distribution equipment to handle the cooling itself, began to expand into handling these duties at the same events to cover the rest of the production.

McDonald continued: “Usually cooling is the thing that takes most of the power at an event, so clients started suggesting that we just use a few more cables and manage the whole thing. We had already built a good reputation and, as Flow grew, it was servicing more and more customers. It just kind of snowballed from there!”

Calvert, who has just celebrated his third anniversary as General Manager at Flow, picked up the story, adding: “We then took on the generator side – cross-hiring from elsewhere at first and installing it ourselves. We were spending so much money renting generators that we decided it would be easier just to buy our own.

“Most companies in the region would supply generators and mains power, leaving the distribution end to someone else. A power company with in-house distribution was unusual, but clients that knew us already were very receptive to the idea.”

Just like when McDonald originally entered the air cooling business, he had a strong vision of what he wanted this new arm of his company to be. It was a relatively natural evolution, but it still required the same considered approach that originally made Flow such a success.

Despite the scale of this task, Flow’s development and subsequent string of successful events as both power and cooling supplier has taken place in just a year. Again, Calvert and McDonald attribute this to strong human resources and a level of trust in their instinct to challenge convention.

Calvert said: “Over the last 12 months we’ve built a power team from the ground up and it’s been a real journey – a journey we are still on. Once we achieve something, we’re already talking about the next milestone. We never anticipated how much you’d have to do,” said Calvert.

McDonald added: “We had to go from being an air cooling business that employed electrical people to manage distribution, to a turnkey business that had a full power team. In addition to shelling out a fair amount of money on kit, we also had to create an entire resource from scratch.”

As soon as the decision was made, Flow hired a raft of generator technicians and engineers, electricians, and project managers – a process the pair was keen to begin before the kit itself was purchased.

Calvert explained: “Having great product is one thing but you have to have the right people as well. On site we are usually the first ones to arrive and the last ones to leave, so you have to spend time finding talented, positive people – particularly when dealing with clients and other suppliers.

“We want to do things differently and that means hiring staff with the right mentality as well as the right experience, which is not an easy task.”

As well as taking care in choosing its staff, Flow has also invested considerable time and effort into staying ahead of the curve when it comes to technological and procedural innovation.

McDonald commented: “The easiest thing in the world to do is default into what other people are doing. All it takes is one month of being complacent or drifting into trends to hurt your business – constantly jolting out of that kind of malaise isn’t an easy thing to do.

“We evaluate each and every scenario to see whether there’s potentially a better way of doing things. You constantly come up against the need to innovate in the world of event power. We feel like we are keeping up with the pace of innovation, which is mainly due to the fact that we have consultants to keep us on track, as well as a great internal team. The power division has itself come on a million miles since last year.”

The high-profile gigs that Flow’s power division has landed in recent months, such as Beats on the Beach (as part of Yasalam 2015, pg.10) and the home-made flying machine insanity that is the Red Bull Flugtag, are testament to McDonald’s claim.

“We assumed that it would take a lot longer for people to become accustomed to us doing this – in actual fact they’ve found it refreshing. We have been studious in our approach and are continuously hunting for new talent, regardless of the fact that we are overstaffed,” he said.

For McDonald, the end goal is to broaden Flow’s coverage further still, without straying from the company’s core values.

He concluded: “We feel blessed that we’ve been able to gain this kind of credibility in around six months of actually servicing events. We can already go into any pitch and the client can feel comfortable that we are capable of doing the job to a high standard. We’re not trying to take over the world, just do what we do, as well as we can do it.”