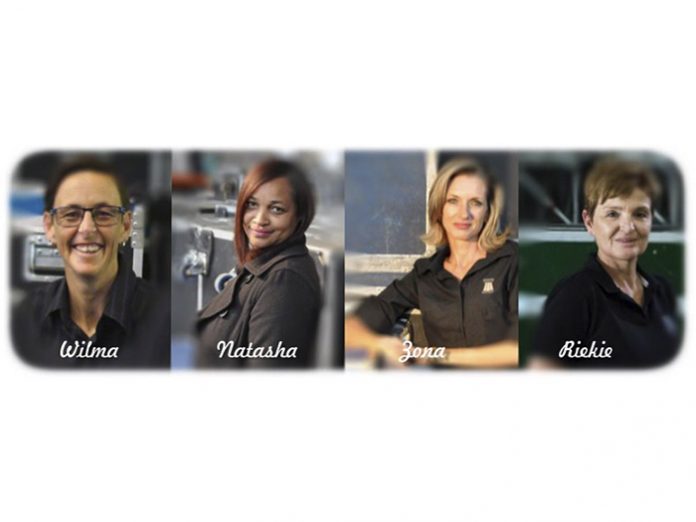 Gearhouse is showing its gratitude and paying homage to its women of Health and Safety across the Group, Zona de Waal, Riekie Wiehahn, Wilma Vermeulen and Natasha Bezuidenhout.

Having been involved in the events industry for nearly two decades, Zona de Waal began her career by starting her own security company which gave her the opportunity to work on huge productions such as Miss World at Sun City and many others.

“I started with Health and Safety in 2009 but decided to re-enter the live events industry in 2010 as a freelancer working for Alliance Safety Management where I had to ensure that all their events were health and safety compliant.”

Joining Gearhouse in 2017, Zona de Waal has put together an all-women team in a predominantly male industry; an industry in which women need to work harder to prove they have what it takes. “My reason for having an all-women team is that women are natural caretakers, safety is not only physical but also entails an emotional side which, I believe, women possess and can connect with people on a deeper level.”

de Waal’s team consists of three other phenomenal women who have paved their way in the industry and have gelled well with the surroundings at Gearhouse SA.

Riekie Wiehahn started at Gearhouse Durban in 2016 after moving on from a mining company “Ever since I can remember I have always been in a male-dominated world – right from growing up in my father’s workshop in my early years where I would spend hours mastering the art of welding and fixing racing cars.” After being involved in a mining accident, Wiehahn decided to focus on health and safety to prevent others from being injured.

“Riekie was already part of the team when I started at Gearhouse and when I saw all the work that she had done as the Safety Officer in the Durban branch, there was no doubt in my mind that she was perfect for the job. I knew that we already had the foundations of a powerful team” said de Waal.

Wilma Vermeulen is the Health and Safety Officer at Gearhouse’s Cape Town Branch. She started her career in logistics where she spent 20 years in the industry.

“I was responsible for ISO Compliance, Health & Safety, Maintenance, Security, IR and Cleaning Services” she explained. When Wilma began at Gearhouse in 2018, she found immense support from her colleagues, especially de Waal. “We had an instant connection even without my knowing that she was the Director’s first choice amongst all the short-listed candidates,” said Zde Waal.

Wilma believes that women are just as strong as men and sometimes even stronger but that it’s not a competition “We are all human, each person created with their own special abilities and the strengths and if everyone works together, we can achieve greatness.”

Natasha Bezuidenhout began her career in the Events industry by working as a Call Centre agent at Computicket. After a while of her being there, the call centre manager, seeing her potential, promoted her to trainer and supervisor.

“It all happened in a very short space of time,” she said, “next thing I knew, I had grown and moved through various departments in Computicket, gaining knowledge along the way.”

Having freelanced at Montecasino’s Teatro as an assistant FOH Manager and on events, Natasha’s understanding of the industry grew into an interest in Health and Safety.

“I have always had a passion for helping others and making sure that people find themselves in working environments that will not only be beneficial to them but also not hinder their health in any manner” she added. Bezuidenhout holds down the fort in an administrative role, making sure that all the paperwork is up-to-date and accurate.

This tribe of powerful women is efficient and effective and makes sure that Gearhouse remains at the forefront of event safety across all spheres of eventing.