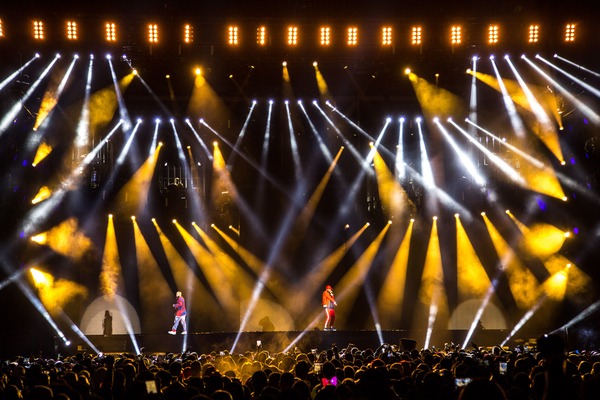 Fill Up the Dome and Fill Up Orlando witnessed a record breaking 68,000 people attending the event, which was produced by Formative, with technical delivered by the Gearhouse Group.

The relationship between the 2 companies is a long standing one and the combination has produced some of the most remarkable events in SA over the past few years. The stage design included a 12m-high pair of glowing-eyed, inflatable lions which towered above the performance area on either side. At the start of the show a massive ‘jungle’ curtain swept aside to reveal a stage dominated by LED panels. A centre screen of stacked MC 7 LED screens linked up with 9.6m x 4.8m flown CB 8 screens to the left and right, ROE Visual strips encased the 4 band ‘cages’ top and back and a DUO LED strip ran the full width of the 24m Stageco stage to create a unified set of LED surfaces. The set up allowed for an immersive multi-screen experience with content running across all surfaces simultaneously. The content was created and supplied by Formative and the panels by LEDVision.

“Each rig is uniquely designed to suit the context; no cut and paste here. For Fill Up FNB, the rig had to be versatile enough to achieve both the big stadium hip hop punchiness and a very theatrical feel, where necessary. The opening sequence / Cassper reveal for this show was especially dramatic; starting with the silhouette reveal on the mountain in blues, moving through several phases and culminating in the spectacular bonfire medley.  I needed to pick up the colours from the AV content, using only sidelight, and grow the colour palette and front fill in synch with the content, in a very theatrical way, to the final point.”

Grobler combined a range of fixtures ranging from Martin by Harman Vipers, Robe Pointe, Mac 2000 Washes, Claypaky Scenius Unico, SGM P5’s, Martin by Harman Mac 101s and Rush Pars to Molefey and Phillip Nitrostrobes scattered around the rig; the latter to be used as audience blinders and accents. Grobler spent an intensive week pre-programming and time-coding looks for each of the 41 songs – working offsite in the LEDVision warehouse as well as in the rehearsal space in Soweto, South Africa using previsualisation software, before getting a chance to finalise on site.

“Our crew were already working in the roof from the Wednesday prior to the show to pull in all the ropes and cable runs for the roof delay” added Audio HOD, Llewellyn Reinecke. “One circumference in the roof catwalk is approximately 1 km, so our crew racks up many kilometres pulling cables at FNB Stadium.”

The main PA comprised 14 L-Acoustics K1 with 3 L-Acoustics Kara down fills, 8 K1 SB subs flown and 16 L-Acoustics V-Dosc out fills on each side. For delays, the team used 8 flown arrays of L Acoustics V-Dosc left and right with 3 L-Acoustics DV-Dosc down fills and a centre delay of 8 L-Acoustics K1 with 6 L-Acoustics Kara down fills beneath that. From the roof, they had an additional 16 hangs with a combination of 70 L-Acoustics Arcs2, Kudo, DV-Dosc and Kara. “The gain sharing/gain tracking functionality on the S6L makes it incredibly easy for our FOH and Monitor Engineers to do their jobs. It also has the capability of recording up to 128 channels of individual live audio and then to play it back for the band in the sound check phase, so that the band can listen and approve” explained Reinecke “It allows for a much more controlled process with better results all round.”

“On FOH, achieving amazing results with the PA, was Tshepo Mokgosi and on monitors was the legendary Revil Baselga.  Because of the complexity of these types of setups, we also sent our resident FNB Stadium expert, Systems Engineer, Kgashane Malatji to oversee the set up from a Gearhouse point of view” said Reinecke. “The combination was very successful and the sound quality garnered plenty of positive comments from audience members.”

“As always with the Formative Team, the look, design and overall entertainment factor was incredible,” continued Project Manager Nickolas Chapman. “On this one, it felt as though we really got it right. All aspects just pulled together beautifully.” Formative’s Gareth Hadden concluded: “I love working with the Gearhouse team! You know you’re dealing with the best guys and we all have fun.”