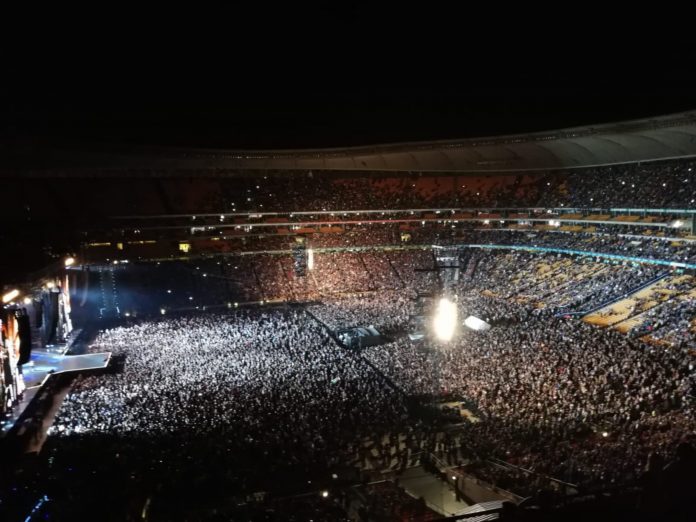 Gearhouse has invested in additional K2 and KS28 L-Acoustics cabinets, 36 LA12x amplified controllers in LA-RAKII and eight P1 AVB audio processors, making it the largest L-acoustics certified provider in South Africa and boosting its ability to service even the most ambitious national events.

This investment also makes Gearhouse the first company on the continent to meet the new KX Standard for its large format systems. In December, this new capability was put into service at the massive Global Citizen Festival in the 90,000 capacity FNB Stadium in Johannesburg.

Gearhouse South Africa has been growing rapidly for a number of years, taking an increasingly dominant role in major South African live events. The Global Citizen Festival is part of the Global Citizen organization which aims to end extreme poverty, and Gearhouse’s participation in the event marked a significant shift for the company.

Gearhouse took on the overall management of the audio side, including liaising with artist management for a raft of mostly local talent supporting some of the world’s biggest acts, including Beyoncé, Jay-Z, Ed Sheeran, and Pharrell Williams.

The Global Citizen Festival required a substantial proportion of those resources and made full use of Gearhouse’s additional inventory, as delay tower deployment had to be limited to protect the irrigation and drainage systems under the FNB stadium’s playing surface.

Gearhouse Head of Audio, Lewellyn Reinecke explained: “We would really prefer to have four delay towers but, because of the restrictions, it’s two hangs plus one on a V tower. At the front, we’ve previously used 14 K1 main hangs and then 15 or 16 V-DOSC for the out-hangs, but our increased stock means that we can now use K1 across the board.”

The FNB Stadium has five distinct seating levels, and level five, which starts at around 40 metres from the ground and goes up to about 60 metres, is normally treated by Gearhouse as a completely separate venue “that gets its own transportation, logistics, and crew,” explained Reinecke. “Up there, you walk about a kilometre just to go around it once.”

Gearhouse uses between 16 and 19 hangs of six elements for level 5. “We prefer to use Kara for that, because they are lighter and are very power-efficient, taking just one LA8 or LA12X for a hang of six,” said Reinecke. “That’s important because the venue doesn’t allow us to use its power in the roof, so we have to run power all the way from the generators.”

Reinecke notes that the company has benefited by using the new L-Acoustics P1 AVB audio processors, which incorporate an EQ station with delay and dynamics processing, and AVB, AES/EBU and analogue audio bridging: “The feedback that I have received from the crew has been phenomenal. The AVB works with all the LA12X amplified controllers and we are able to monitor the whole system. It is quite an amazing thing to see.”

Overall, Reinecke said that the new K Series stock has brought new opportunity to Gearhouse and has made a big difference in the field. “The new stock and the improved coverage has helped us a lot,” he said. “It means we can get on with our main jobs, without having to worry about how we reach every part of the biggest venues – and the KS28 is a lot lower and louder…

“Having such a complete system makes a big difference. It’s given us a lot of headroom to play around with, which is to the benefit of the audience, and the engineers.”