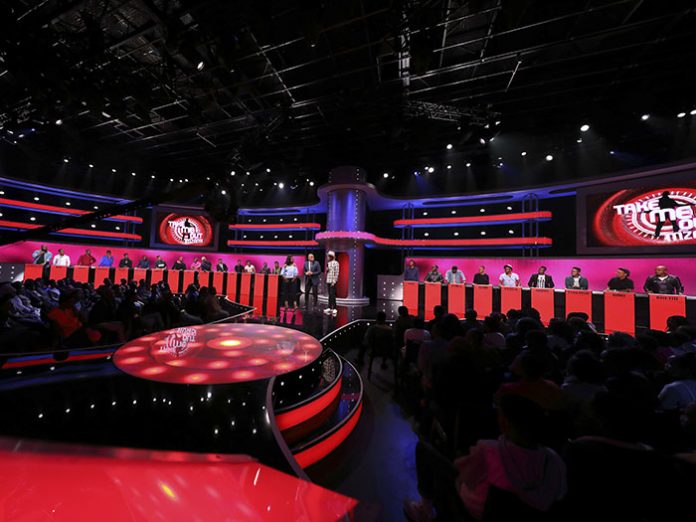 A fresh and provocative season of television dating show Take Me Out aired on South African television screens in July, courtesy of Vuzu Amp and local production company, Rapid Blue.

A long-term relationship between Rapid Blue and technical supplier Gearhouse Group has resulted in top notch delivery standards on previous collaborations on Strictly Come Dancing, SA’s Got Talent, X-Factor and Crazy Games, amongst others, so it was evident that Gearhouse was more than capable to take on the project. In the process, the team outdid themselves, lifting the bar on quality and technical delivery on all levels.

Take Me Out is a pre-recorded show and took six weeks to put all the elements together for the South African version of the show, which maintained the look and feel of the UK show but was a fresh design adapted and modified from the original design for the new production.

The ingenuity behind the set design came from Michael Gill of Michael Gill Designs, and with the expertise of David Smith and Rory Manley at Sets Drapes Screens, the vision was brought to life. Sasani Studios was the venue for the local production and the plans and concepts from the previous shows had to be reworked to fit the layout of the studio with the allowance for the safety gap for the access points taken into consideration too. The Gearhouse rigging team, headed by Adrian Manley, went the extra mile to accommodate last minute changes and additions. They worked closely with the studio’s building engineers to ensure that the parameters / capabilities of the venue were strictly adhered to.
Ninety percent of the set was pre-built in the Sets Drapes Screens workshop over four weeks, to ensure that everything worked exactly as planned, before the components were disassembled, rebuilt and finished on site at Sasani film studios.                                   The environment comprised of 30 podiums for the contestants, a ‘lift’ for the date candidates to arrive in as well as a central floor section for the game show host with an entrance staircase on the opposite side.
Sets Drapes Screens used a combination of stock and custom podiums and bespoke steelwork, clad in fibreboard and acrylic. High gloss MDF flooring and rounded fittings with LED strips complemented the curved sweep of set. There was also a high volume of built in LED screens giving the set an additional layer of colour and movement. According to Smith, the only real challenge of the build, was the short load-in time in studio.

“Ideally, we could have done with another two days for the build, but the schedule did not allow that luxury. In any case, as far as set builds go, this is a fairly simple set – it was just the large scale of the area we had to work in that was the main consideration.”
Manley also added that during the planning, set-up and running of this event, he experienced an unprecedented synergy amongst all the group’s individuals. “The amount of pride each department and crew member took in making this show a reality, contributed hugely to the finished product, along with all the extra hours everyone put in to get it to that level of quality.”
Lighting Designer, Robert Grobler explained:
“When looking at the lighting aspect of a show like Take Me Out, we had to bear in mind that for a television production, beam angles and colour temperature are key to achieving the best result for the viewer at home.

“You need to be flexible when getting the general lighting level right, and also take into account the individual lighting of each panel guest, as well as the host who is on the move – with cameras following him. So you need to be on form and not miss a beat.”

Although Grobler has been extensively involved in past iterations of Strictly Come Dancing and So You Think You Can Dance, working on a game show at this level was a new but rewarding experience.

“Lighting wise, our goal was to create a similar look and feel to the international versions, so it was about researching the international shows and then compiling the material from client before putting pen to paper to draw up the lighting plot” he said. “The look we ended up with was devised using a number of Robe products, namely Robe’s original DL range of LED moving lights together with DLS Profiles, DLX Spots and DLF Washes and topped with ColorSpot 700E ATs, Robe LEDForce LED PARs and Robe CityScape 48. The Robe DL series is really a great fixture for TV, especially when you start to understand the colour mixing system and how the different light sources interact with the other parameters in the fixture. We also used ETC 15-30 degree profiles and Par 64s to light the audience, ETC 14 degree profiles for the panel member specials and Martin Mac 101’s as FX lighting for the entrances.”

The LEDVision team had an extensive role to play in the visual display for the production with LED elements used for video texture layers on the contestant lecterns in wide-shot, eye candy backdrops, video screen backgrounds and lighting strip elements to enhance the overall ‘WOW’ factor of the show.

“This was the second instalment, although with a different take on the design of the show, so we understood what the client would expect from the LED,” said LEDVision’s Richard Baker. “The contestant lecterns had to display the contestant’s names as well as work as a creative layer, incorporating the game show items individually. We needed a sharp image, so for these we opted to use our high-resolution ROE Bp3 Panel product. We collaborated with the game engine designer to provide a real-time video layer which controlled effects on each individual’s unit. This was triggered by the contestants via a button on each lectern. Each time the contestants pushed the buzzer, the LED layer was underplayed through the Catalyst playback servers and sent to the screens together with audio and lighting effects.”

The game engine software was developed locally by Julio Costa, a freelancer for Gearhouse, who was more than happy to accommodate the producers with their requirements during rehearsals and while running of the show. This system which displayed the names on the contestants LED screens, played audio to acknowledge the button pushes, triggered lighting queues to light the contestants in red as well as collecting statistics of who pushed which button first for feedback to Phat Joe, the Presenter.
Chris Grandin, the Group’s Technical Advisor, was involved in assisting Costa so that his system would interface with the Catalyst Media server and LED screen processing. Chris also created one or two pieces of custom content for the screens.
Two screens were curved to create a wraparound effect behind the contestants using a much lower resolution LED screen with a back projection diffusion screen to soften the video textures. Three standard playback screens were used as the insert playout screens and for these, LEDVision supplied a medium resolution Lighthouse R6 screen and two ROE BP3 high resolution screens. To add to the overall look of the show 300 metres of ROE Strip were strategically placed throughout the set.

From an Audio point of view the acoustic challenges for a TV show vs a Live PA is to achieve a room level loud enough for the in-studio audience to hear, but soft enough not to interfere with the Broadcast Audio. According to Friederich Wilsenach, FOH Engineer for Gearhouse, “This was achieved by careful PA aiming, and attempting to delay everything as close as possible to the main source so that everything sounds as acoustic as possible, thereby naturally boosting the level in the studio.”

With 32 contestants interacting with each other, live on stage, all with open microphones; things can get tricky. Wilsenach took care of that with the help of a Yamaha QL5 mixing console and Dan Dugan Automatic Mixer, which allowed him to automatically keep all the contestant microphones levels open and audible to the audience as well as to fellow contestants.
“With proper planning there can be very few surprises” concluded Project Manager Bill Lawford, “In many contributors’ opinion, this show was flawless from start to finish and of course it always helps when the client is as focused and organised as Rapid Blue. “When everyone is working together in a streamlined fashion, the final result can only be a success and this one really engendered a mass sense of accomplishment and pride on a job well done.”
www.gearhouse.co.za