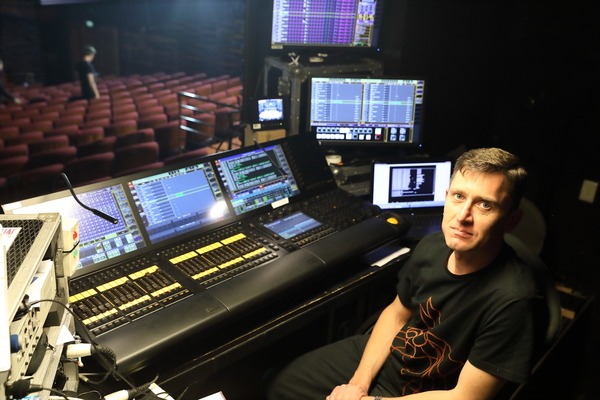 “This production of Evita has been publicised as the original production,” said Duncan. “We had a few of the original creatives out for the set-up, some wonderful people. It was interesting to see them interact with each other, people who have known each other for over twenty years and who are not scared of speaking their minds.”

LD Richard Winkler from New York, along with his associate Gary Echelmeyer and programmer Joe Allegro were behind current lighting show, which was originally built on MA in a visualisation studio and arrived in Johannesburg complete, based on the 1998 production. While untested on a full physical rig, the programmers had examples of each light fixture to ensure correct colour matching.

“I didn’t get to really do much with the desk until the first performance,” explained Duncan. “Joe even operated the final dress so that they could do live notes. It was great to see him work, and he did interesting things on the console – which I had fun reverse engineering to know what was actually inside. It’s interesting on Evita because none of it’s my own programming, so there has been some learning how things have been put together – which we covered when setting up. In the early days, if something went wrong, there was sometimes a bit of digging around to figure out how it is controlled.”

The show runs on a grandMA 2 full size FOH console, featuring an MA light on stage – both networked and sessioned. A trio of NPUs run 10 universes of DMX. “The onstage console is the backup so if anything goes wrong, the on-stage lighting tech will run cues until I can run backstage, but the system has been pretty solid and there have been no issues. “We’ve got two Catalyst servers backstage and 2 20K projectors running video, all of which run on Artnet. It’s different to other shows I’ve worked on where Catalyst has its own cue list. Here the video cue list is on the MA and all the commands to Catalyst are sent from the MA which actually makes it quite a bit easier, because there’s only one console to talk to.”

Duncan works closely with Alistair Kilbee from Gearhouse Splitbeam, Technical Director for the SA and Asian Tours. “We are in touch quite a lot, he handles all the logistics for the moves which is great and he is our go-to person for a whole lot of things.”

Introduced to the grandMA over 10 years ago, Duncan and LD Denis Hutchinson worked on the production of Hairspray the Musical, which was to run at the then brand new Lyric Theatre at Gold Reef City. “Denis and I were shown around what was one of the first consoles in the country at the original DWR premises. Duncan Riley of DWR had brought out René Berhorst from MA and those few days were probably the best introduction you could have to any console. Now there is MA2. I still work on MA1 desks and my mind has to do a bit of a switchover to MA2 (the long “Clear” button press is a few tenths of a second longer on MA2!), but we get on quite well, the console and I.”