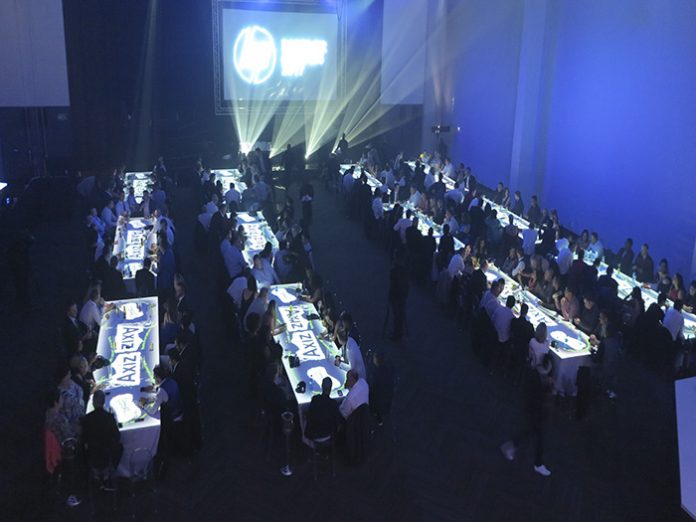 Disruption was the theme of the 2017 HP Partner Awards Evening and this was highlighted by HP Africa MD David Rozzio, who emphasised the company’s marketplace aims in 2018; through its strategies and new products. With Keystone Productions supplying an idea to disrupt a generic awards evening format.

The Green Hippo products running the show included 3 Hippotizer Boreals and 1 Hippotizer Karst all feeding 13 Christie LHD 700 7K Projectors. These projectors were used to map the 12 rectangular dinner tables from above with custom content. The 13th Projector was used for the presentations and video content for the Awards Evening.

Christopher Bolton from Keystone Productions called on other Hippos to complete the show. Staal from Visual Audio Productions supplied 1 Boreal and 1 Karst; while Wilhelm Disbergen of Yellow Bunny Productions and Bolton brought 1 Boreal each. To our knowledge, this is the most Green Hippo Media Servers used on a single event in South Africa. “It was amazing to see the Green Hippo users in South Africa coming together to make this event possible,” said Dylan Jones of DWR Distribution.

“The concept to do multiple tables is something that we as Keystone Productions came up with a while ago,” said Keystone’s Bolton. “Finally, we had a client that wanted to do something special. Warren Liss was the Video Director and really created some spectacular content.”

The intro to the evening involved animated plates and tablecloths followed by bursts of colour onto the table surfaces. Each award category had a different content theme on the tables and a random draw occurred every so often with a bouncing ball across the different tables eventually stopping at a chosen winner. Bolton added: “Green Hippo just works, on this job in particular the system never let me down. The combination of the [MA Lighting] grandMA2 and the V4 hippotizer software rocks! 39 active layers over 13 outputs with no problem.”

When asked about any challenges to the event, Bolton commented: “As with some venue’s things at times do not work out as planned and one is faced with challenges. The venue’s ceiling height was only just high enough to fit the image on the tables. We had a tolerance of 15mm in getting the structure up high enough to fill the tables proved challenging but we got there in the end.”

He concluded: “There was a great response from the people who attended the awards evening and most importantly at the end of it all a very happy client.”