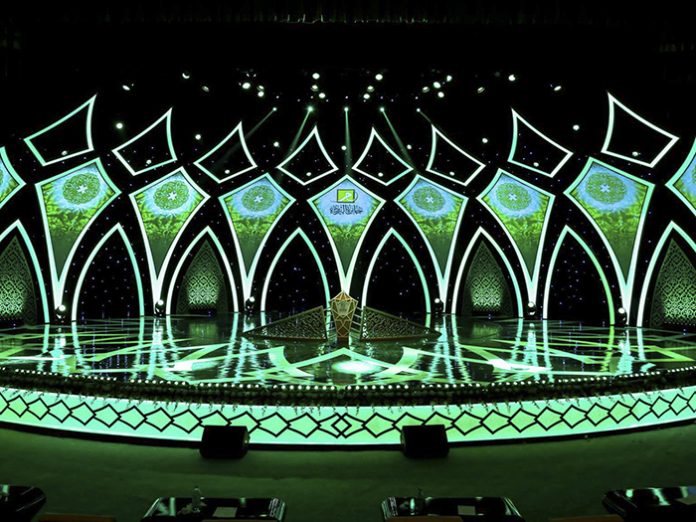 Open to artists specialising in calligraphy, poetry and music from across the Middle East, the prestigious awards are held under the patronage of His Highness Sheikh Abdulla Bin Zayed Al Nahyan and organised by the UAE’s Federal Ministry of Culture and Knowledge Development.

For the 12th consecutive year, Miranda – at the helm of his Dubai-based company Lighthouse Productions – was responsible for designing and supplying the awards’ set and lighting design.

This year the starting point for Miranda’s design was Islamic architecture – with its geometric curves, arches, complex symmetries and domed structures. The intricate calligraphy associated with individual domes was blended with a modern aesthetic. This was created by using multiple dome shapes on the set as projection surfaces, which were outlined in LED and fully mapped to receive detailed custom content. The patterning theme was also continued on the black gloss floor, so the design united all elements of the environment.

Miranda chose the Jands Vista L5 as his control console, so he could deftly and easily synchronise his sophisticated lighting design and the awards’ video content. Designed to cope with the complex demands of modern shows, the powerful Vista system makes controlling a mix of lighting, LED and media server technology fast and incredibly simple.

“I saw the first demo of a Jands Vista console back in 2011 – and realised that the design and programming format was created in a way that inspired creativity in the quickest way possible.

“I like a desk that allows you to be creative, as opposed to spending the first hour programming and patching. The ease of access to everything across the physical console and the Wacom screen has made my lighting designs come together more quickly on site, allowing us to be more creative in the process.”

The awards’ programmer and console operator was Adrian De Guzman, also of Lighthouse Productions. As video and lighting were so interwoven, he found the Jands Vista L5 proved itself adept at connecting easily to the media server without triggering latency issues.

“The fact that our AV department also now uses Jands Vista consoles to trigger media tells you everything you need to know about the ease of learning the desk for people without a lighting background. The layout of the large screen and how reliable the product has been for us over the last five years speak volumes about its build quality,” said De Guzman.

“The quick programming capability of the Jands Vista, as well its reliability on operating multiple cues flawlessly, has helped maintain Lighthouse Productions’ reputation as one of the best and most consistent entertainment production design companies in the Middle East.”

The Vista range includes a choice of portable, flexible control surfaces and self-contained consoles. Equally at home on tour or as a venue’s house console, Jands’ award-winning Vista lighting and media control system has been embraced by leading designers, companies and venues all over the world on a wide range of shows.