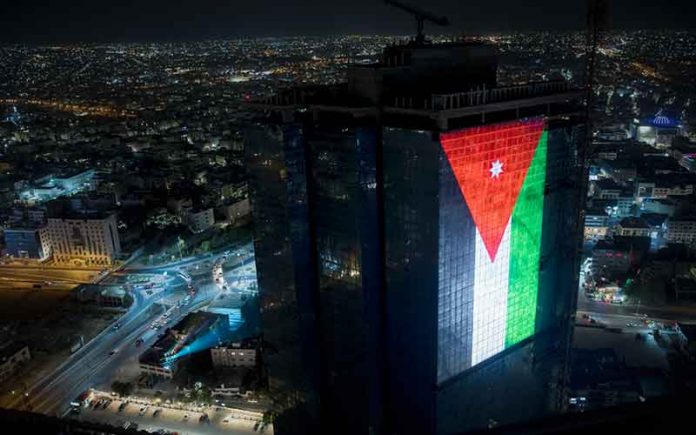 Celebrated on 25 May every year, Jordan Independence Day is the most important date on the Jordanian calendar, marking the country’s independence from the British government. For this year’s celebrations, the Jordan Royal Court approached local production agency Behind The Scenes, which in turn appointed Dubai-based VITA Events to create the largest 3D projection mapping ever delivered in the country.

With wall and table speakerphones, along with“The enquiry was based on the high-scale visibility of the iconic Jordan Gate Towers in Amman,” began VITA Events Founder and Managing Partner, Giorgio Devecchi. “We were asked to provide a 3D mapping projection that would cover all four façades of the towers, which can be seen from all over Amman.”

With the projection taking place over three nights from 25-27 May, VITA Events worked with the Royal Court and Behind The Scenes to produce detailed 3D-mapped content, which displayed historical sites, institutional footage and ground-breaking infrastructure that celebrated not only the traditions of the country but also the innovative vision of Jordan’s next generation.

While the show was the largest of kind ever to take place in Jordan, for Devecchi – who has been delivering 3D design and projection projects for many years, working with the likes of MDLBEAST and Al Wasl Dome in Expo 2020 to name but a couple – it was a relatively straightforward undertaking. “Everything moved quite quickly on this one,” he recalled. “I did a few site visits and came up with a proof of concept and we started preproduction around five weeks out from the project delivery date.”

In the early stages, the main factors the VITA team had to consider were identifying suitable projection locations and ensuring that the façade of the building would display the content in the desired way. “It was important to find not only a clear path between the projection surface and projection site, but also one with the right steepness and incidence of light,” he explained. “The reaction of the façade was also important. It was dark glass, which helped with absorbing and diffusing the light.”

With the site visits and proof of concept done, it was decided that the best solution would be to light the four faces of the building using 70 Panasonic PT-RZ31K projectors, three disguise vx 4 and one 4x4pro, split across three locations. “The main challenge was finding the best solution to synchronise the content playback across all the projectors,” Devecchi revealed.

“The distance between each tower and the projection locations was anywhere from 600m to 1km, with heavily populated areas in between, so running cables wasn’t an option,” he noted. “We came up with the solution of transcoding the world clock to LTC in each location, getting the perfect sync after many commissioning tests. We used Brainstorm DX-16s in each tower, synced to a public NTP server on the internet and transcoding into LTC to synchronise the towers.”

Devecchi described disguise as “a key element to guarantee that all the technical requirements could be fulfilled perfectly”. He added: “From the practical and high-quality 3D mapping projector calibration to the possibility of sharing the same project through all the very distant servers and synchronising in LTC, disguise as usual made the job a lot easier and faster for the engineering department. The pre-visualisation for client review and the multi-operator option were two key elements that only disguise can fully offer to provide the best service as a media server.”

“The Jordan Royal Court, as well as our client, Behind The Scenes, were a pleasure to work with,” Devecchi concluded. “Most importantly, the people in Amman were very excited to see something like this happening in their city. I would gladly return to Jordan for future projects.”