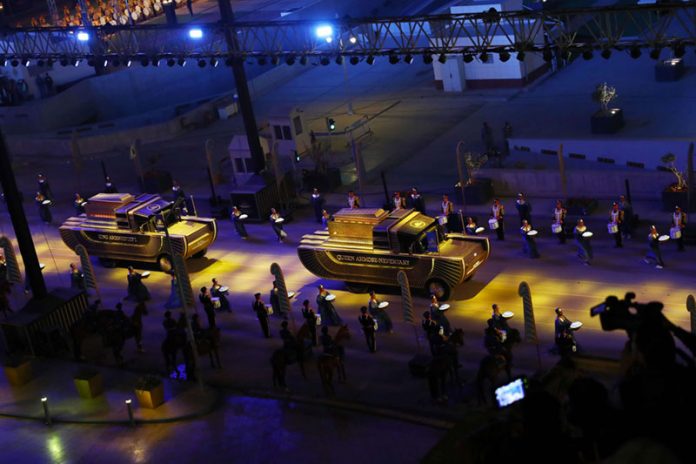 An L-Acoustics line array system was deployed by Alchemy Dream Studio for the recent National Museum of Egyptian Civilisation (NMEC) parade in Cairo. Held to mark the opening of the new-built museum, the epic opening ceremony, which was supervised, directed and organised by Media Hub Saadi-Gohar Company, combined marching bands, cheering children, synchronised lighting, and a line-up of famous Egyptian actors and singers.

The centrepiece of the production was the transfer of the mummies of the ancient kings and queens of Egypt from their previous resting place in the Egyptian Museum to their new home. Twenty-two mummies in chronological order of their reigns, from the 17th Dynasty ruler, Seqenenre Taa II, to Ramses IX, who reigned in the 12th Century BC, were paraded through in the heart of Cairo while Egyptians watched and listened to the historic pageant.

At the new NMEC Museum, L-Acoustics systems covered both indoor and outdoor concert locations. The outdoor area was engineered by Remon Emad, with eight ground-stacked K2 cabinets – four per stack – deployed together with four KS28 subs. Within the orchestral hall, two hangs of six K2 were complemented with six KS28 subs, whilst four X12 provided frontfill. Two L-Acoustics Syva together with a further eight X12 provided monitoring for the performers on stage.

Alchemy Dream Studio was contracted to create sound for the event by Key Films Productions’ Adel Abdallah. Alchemy’s second engineer and co-designer, Youssef Iskander, assisted Mafdy Thabet, chief engineer and system designer of Dream Studio, throughout the event. “Throughout the whole parade, live music was played by an orchestra and the mass choir (inside the orchestral hall in the NMEC) was widely broadcast,” recounted Thabet. “Our role was to provide front of house and monitor systems for the orchestra and the choir inside the NMEC. We also handled mix duties in the museum, the broadcast mix for TV and the whole parade at Tahrir Square.”

The temporary location for the event was not without its challenges. The walls and ceiling of the hall were of ‘drywall’ (gypsum board) construction, with PA hanging points extremely tight to the venue walls due to projection and lighting constraints. With the assistance of L-Acoustics consultant, Andrea Taglia, Soundvision software was used to predict and measure acoustic performance. The modelling process resulted in adjusting the angles of the K2 arrays. “For the first three boxes, we used 70° angles; for the last three, we increased to 90° angles to reduce the reflections on the walls,” explained Thabet, who worked in conjunction with acoustics consultant Joseph Habib on the setup. “Additionally, using the graphical interface of L-Acoustics Network Manager, we adjusted the FIR of several boxes to ensure consistent sound throughout the venue.”

The royal parade event had to run smoothly and, as Egypt’s past segues into its future, online responses to the live streams of the event expressed pride in the country and kudos for the performers. “After the event, we were very happy with the extremely encouraging feedback of the people working in the music industry in Egypt, both musicians and sound engineers,” Thabet confirmed.