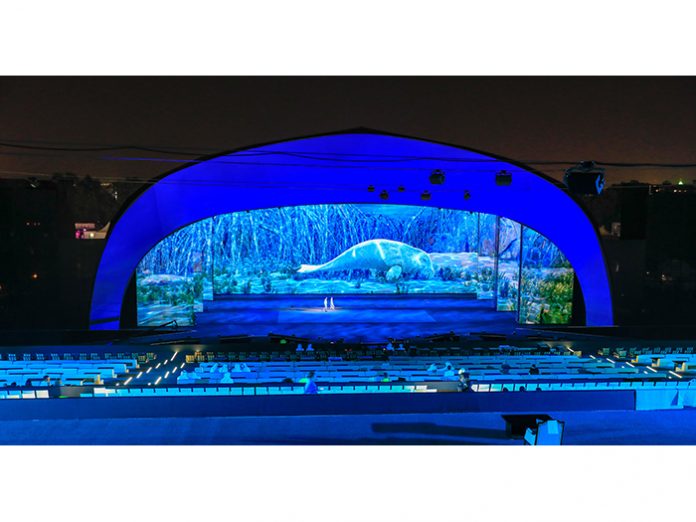 The United Arab Emirates’ 46th National Day celebrations took place on 2 December 2017 with a series of events organised by the Abu Dhabi Department of Culture and Tourism.

The Here is the Future event programme developed by event producers Done + Dusted UK featured a 3-scene, 11-chapter spectacle showcasing a future that will benefit from innovations such as artificial intelligence, space sciences and renewable energy, all slated to enhance the living standards and happiness of the citizens and residents of the UAE. It was attended by the UAE royal family and leaders, senior state officials, heads of government, representatives of the armed forces and police, as well as local citizens.

“With an event themed on the future and innovation, Done + Dusted logically wanted to feature the very latest technology in their proposal,” said Auditoria’s Scott Willsallen. “This was the ideal environment to deliver something really special from a sound perspective, so I briefed them on the L-ISA immersive system and how it can be used to create a perfect match between the show image and sound, enhancing the connection between the audience and the performance.”

Willsallen’s set about designing the L‑ISA system for the event, collaborating with L‑Acoustics’ founder and L-ISA creator, Dr Christian Heil, along with Guillaume Le Nost, Director of R&D at L-ISA. “I spent a few weeks with the team to understand the system in detail and how it could be used in different environments,” Willsallen recalls. “Using L-Acoustics 3D acoustical simulation programme Soundvision, which includes the qualification tools required, we certified the L-ISA design.”

The stage for the UAE National Day event was 40m wide, with 20m from its front edge to the front row, whilst the audience area was around 50m wide by 50m deep. The system designed by Willsallen and the L‑ISA team comprised a Scene System consisting of 7 L‑Acoustics line source arrays, spaced 5m apart across the proscenium arch and masked by a projection surface. The centre array was 9 K2 cabinets, with 3 arrays of 9 Kara either side. In addition to the Scene System, an Extension System of 4 arrays of Kara – 2 per side – was used. Sub-bass was provided by a single block of 18 SB28 (3 wide by 6 high) just off-centre, behind the rear LED screen.

“We also added a surround system of 10 arrays of 6 Kara – 4 each on either side of the audience area, plus 2 at the rear,” Willsallen continued. “But the most impressive part of the system was the arrangement of overhead loudspeakers, which were suspended from 4 catenary lines strung across the seating, each supporting multiple X8 coaxial clusters. The overhead system was fed with 12 outputs from L‑ISA and allowed us to use multiple reverb outputs to effectively add a ceiling to the outdoor venue. The effect of these overhead loudspeakers was remarkable and easy to take for granted. But when they were switched off, it was like watching a performance ‘over there’ somewhere; when they were on, it was like being inside the performance.”

The preparation process for the show was straightforward, with Willsallen finding the L‑ISA system easy and intuitive to use. “The software provides lots of information for fault finding and signal metering,” he added. “We found the hardware reliable and the team at L‑ISA were only a phone call away if we had any questions. We worked on one mix for all music stems and another for all sound effects, then we recorded it all together for playback.”

A DiGiCo SD5 digital mixing console was used to provide the EQ, dynamics and bussing resources needed to deliver 80 outputs to the L-ISA processor. The processor then delivered 40 outputs back to the console (1 output for each loudspeaker array, plus a few mix-downs) for monitoring and delivery to the audio nodes around the site.

“The event was a huge success and the L‑ISA system was outstanding,” Willsallen concluded. “Pierre Mussche, musical director for the event and co-founder of Musicom Sound Design and Music, commented that it was the best sound he’s ever heard. Nick Levitt, the event’s production director, said it was even better than he had imagined it would be, and the team at Done + Dusted were thrilled with the way the sound and vision worked together to deliver a truly unprecedented immersive experience.”