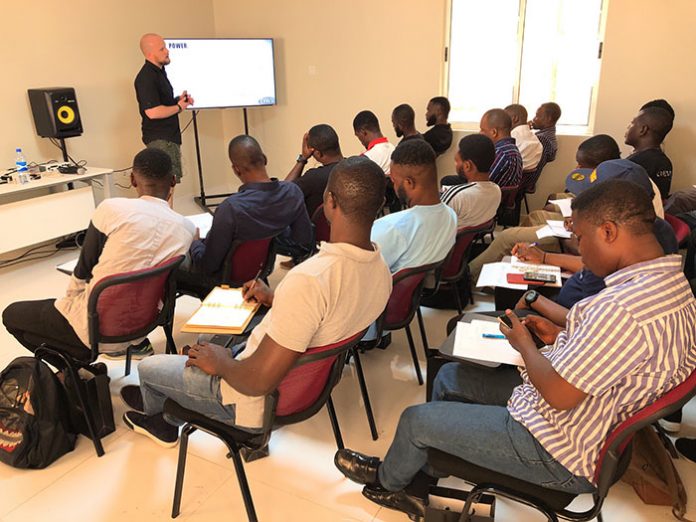 It’s difficult not to feel emotional when visiting the streets of Nigeria. Often known as the ‘Giant of Africa’ due to its large population and economy, Nigeria has an estimated 197 million inhabitants, many of whom have a hunger and passion for knowledge not often seen elsewhere in the world. With this in mind, South African based DWR Distribution recently took hands with Livespot Productions to present a two-day lighting workshop, hosted free of charge in Ikeja, GRA in Lagos.

The DWR team included Jannie de Jager and Michael Taylor-Broderick who presented the training, along with Duncan Riley, Kyle Robson and JP de Vernon, who were eager to be part of the adventure.

“I loved the attitude of the attendees,” said Michael Taylor-Broderick. “They came thirsty for knowledge and were deeply invested in the training. I was humbled by their sense of gratitude towards us for the sharing of our knowledge. There is huge potential in the entertainment industry in Nigeria and I believe the industry, as a whole, have yet to realise what these capabilities are… I believe they are boundless.”

The experience was echoed by Jannie de Jager. “There is an incredible desire for information by the people of Nigeria,” he said. “I have never had a workshop with so much involvement and feedback from the trainees. The questions asked were good and extremely relevant to their situation and at times I had to think a little before answering! This enthusiastic involvement helped to steer the course in a direction that was pertinent to meet their needs.”

A distinct bond was formed within the DWR team as it travelled in unison to the Northern Hemisphere. “We had a special energy which went with us and made the trip exciting,” said de Jager. “We were very well accepted and taken care of by the locals.” The team really felt the love as locals asked for selfies, and all parties were appreciative to have spent the time together.

Diving into a new culture and a new cuisine, was as exciting. “The food is very different of course, but certainly appetising,” ended de Jager. “The highlight of our day was the lunch we received called Peanut Butter Chicken. Saying it was delicious, is a complete understatement… I think scrumptious describes it a bit better.”