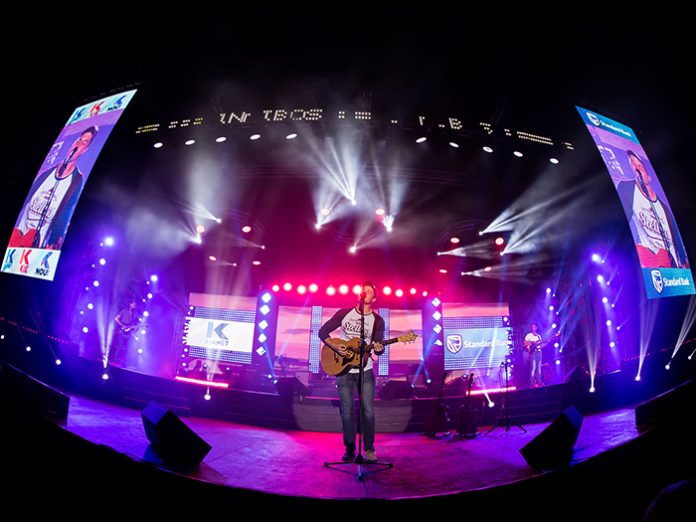 MADI has come a long way since the first AES standard was published in 1991. Originally devised for the studio, it has since migrated into live sound and now underpins major events around the world – events such as South Africa’s InniBos music festival, where DirectOut’s M.1K2 MADI Routing System is at the heart of the audio operation.

The five-day Afrikaans festival is the largest festival of its kind in South Africa, attracting main stage crowds of around 35,000 people per show. At the helm of the audio control systems is sound engineer Gabriel Le Roux. “My journey to large-format MADI solutions started in 2013 when Wild & Marr suggested I buy an M.1K2 router to split signal from my MADI stagebox to multiple digital consoles and audio recorders.

“After using the router for a few weeks, I began to realize the immense power and flexibility of the unit, and my signal distribution designs became more complex. Within a short space-time we started integrating Soundcraft, DiGiCo, Yamaha, Studer, Allen & Heath, Avid, Midas (via DN9650) and other systems.

This “MADI methodology” allowed technical suppliers to hugely reduce the amount of gear needed on a production, with flexible digital splitting made possible between any MADI enabled consoles and stage-racks using the M.1K2 and basic clocking protocols.”

When an M.1K2 was chosen for the reality TV show The Voice in 2015, Le Roux was called in to assist with the integration of the system’s design.

“This was a light bulb moment,” he recalled. “We were forced into more complex matrixing as most of the consoles only had two or three MADI input/output ports and we needed to consolidate an average of five sources plus tie-lines between four consoles and other playback, recording and video gear. We also had comms and loudness metering routed via by the M.1K2.”

The first fully integrated MADI system for the five-day InniBos Festival followed in 2016. The same routing model was then used for larger and well-known theatre-style productions, which usually require a year of planning and often up to six months of off-line lighting and video programming.

“I was brought in on a freelance basis to assist with control systems integration in these productions,” said Le Roux. “My main objective was simple yet stable integration of the different production elements and the highest possible level of redundancy. The DirectOut M.1K2 router was introduced in this kind of events in 2016 and has become the heart for all the audio routing. The only remaining analogue signal is the short run from stage to the inputs of the stage-racks and the emergency talkback system – all other audio is routed digitally via the M.1K2.”

The M.1K2 is joined in DirectOut’s router catalogue by the MADI.BRIDGE, 8-port MADI switcher and router with remote control and SPLIT.CONVERTER, a combined MADI format converter and signal splitter.

Lorenzo Sassi, Business Development Manager at DirectOut, has recently visited South Africa to introduce these new products during the Wild & Marr Studio Showcase and to present globcon, a new software for consistent and coherent control of professional entertainment equipment from different brands as if they were just one.

“The numerous features included in the PRODIGY Series along with its modularity  and the integrated control offered by globcon create a very powerful set of tools” says Sassi, “These new products, combined with all the other converting and routing solutions we offer and the possibility of managing all of them simultaneously via globcon, really candidate to be the perfect infrastructure to support a complex audio system and allow DirectOut to meet the challenges that both present and future of professional audio are bringing.”