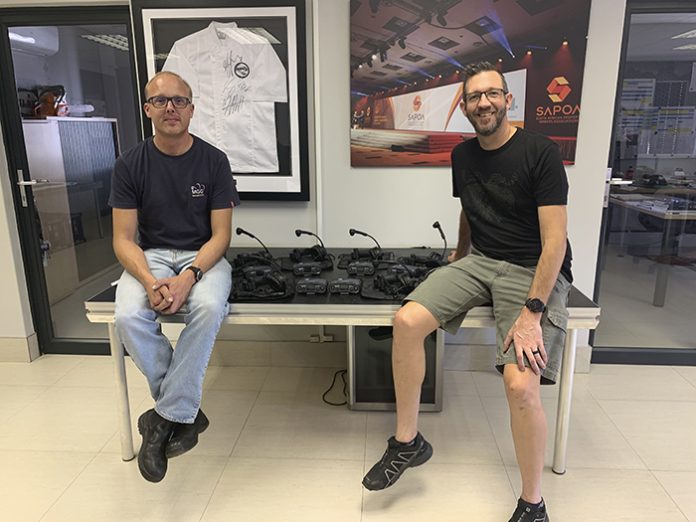 Rental company MGG has invested in an additional six FreeSpeak II Digital Wireless Beltpacks from DWR Distribution to cater for the technical communication at last years’ incredibly successful Afrikaans is Groot, a large-scale music production hosted at Time Square’s Sun Arena in Pretoria. MGG also upgraded their Clear-Com licence and are now able to run 25 comms on a single base station.

Mark Gaylard, owner of MGG, recalls buying his first comms system some fifteen years ago: “We bought six Prosound Commpac belt packs and they are still working and doing gigs.” He still has the original box they came in.

Back then Prosound Commpac was the only party line communication system of its kind
available in South Africa, locally made and sold by Prosound. Mark Malherbe, Technical
Director at Prosound explains, “We’ve been making our comm. system since 1984. We won a contract in the early 80s to do the sound communication system at the Playhouse Theatre in Durban when it was being renovated. The technical project consultant in the UK had specified Rank Strand communication and we were awarded the tender, but then Rank Strand decided to discontinue the line and moved away from audio. We negotiated with Rank Strand to make the product under licence and basically bought the rights to redesign and continue to manufacture them. We have sold tens of thousands, now under the name ApexPro, and you will find them in any theatre in Sub-Saharan Africa.”

In recent years shows have changed and event organizers and technical suppliers are
pulling out all stops to impress their audience. Add to this new technology, some of which
did not exist a decade ago.

“Fifteen years ago you would just have four communication packs assigned to the director,
followspotter, audio engineer, and lighting designer. Big gigs would be time-consuming and a student or young technician would be assigned to run extra comms. cable to all the locations where comms. were utilized. If it wasn’t run well, you’d hear a buzzing sound over the comms.,” explained Gaylard.

“Now productions are very complicated and you need to have comms. in place. Everyone on a show needs to communicate from lighting to sound, back-of-house, stage managers, and the technical team. You can easily have forty comms. on an event.”

Gaylard started investing in Clear-Com six years ago. “The gear is reliable, robust, and a
game-changer. The greatest advantage is the wireless system, which enables everyone to
move around freely and talk to each other as often as needed with no cables and no buzzing.

“Clear-Com also allows you to record the whole event for reference after an event. You can
link it to a sound console for further routing and stream the sound on the internet.”

The brand is now supported by DWR Distribution. “This means we can repair gear locally
with Derek Kruger at DWR, whereas before equipment would have to be sent to Germany
which makes repairs really expensive.”

Chris Pugh from DWR looks after the Clear-Com brand and delivered the new equipment to
MGG. Pugh commented: “We are very excited to be taking on Clear-Com as a brand. It’s great, offers good quality, and is hardy. MGG was our first Clear-Com sale. For the calibre of shows that they pull off, I feel that this will be a great addition to their inventory.”