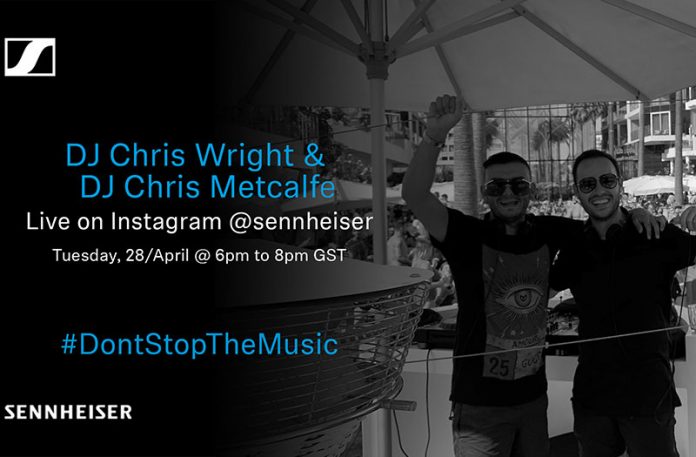 In an effort to bring the excitement and energy of live concerts to music fans, even as lockdown measures remain in effect across countries in the Middle East, Sennheiser has announced a series of free live streamed concert through to the end of April 2020.

Part of Sennheiser’s #DontStopTheMusic initiative, this series of virtual concerts will be hosted on the @sennheiser Instagram account, enabling fans to tune in, no matter where in the world they are based.

The star-studded roster of artists that is set to perform includes several international superstars such as DJ Luciano, Mambo Brothers, and Wingenfelder as well as the Middle East’s hugely popular duo, DJ Chris Wright & DJ Chris Metcalfe, who will perform on Tuesday, 28 April at 18:00 Gulf Standard Time (GST).

While the concerts are completely free to attend, Sennheiser is encouraging participants to donate to the fight against coronavirus. “At Sennheiser, we’re delighted to be working with these fantastic artists to help spread positivity by putting on exclusive concerts,” said a spokesperson. “They’re totally free, but if you do want to say thank you, do consider supporting the WHO in its fight against the coronavirus.”

Donations can be made via the official WHO website.

Schedule of live concert streams: April 27 to Thursday, April 30
To keep up to date with the concert schedule, Sennheiser advises people who are interested to follow @sennheiser on Instagram and switch on notifications in IGTV to receive alerts, as dates and artists may be subject to change at short notice.