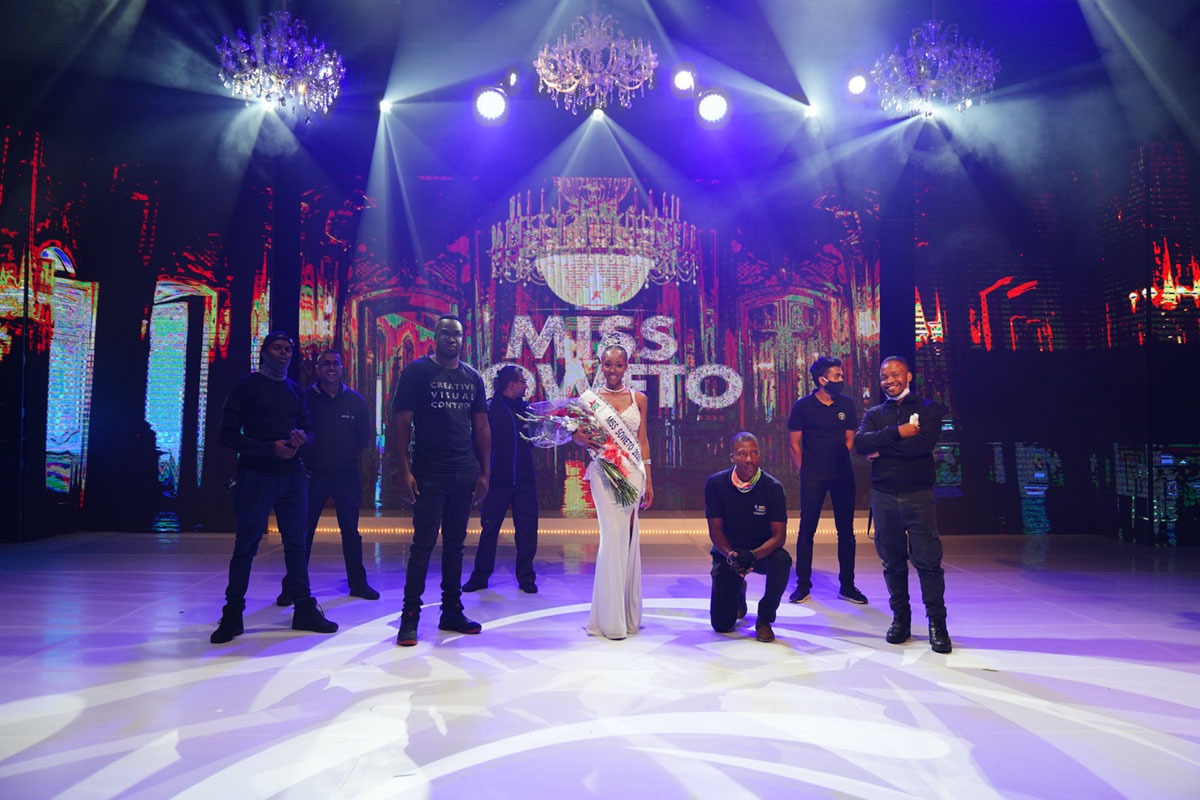 For the fourth consecutive year, Vimal Rawjee of Insane Sound and Lighting was appointed to supply the full technical for Miss Soweto. Hosted at the Soweto Theatre in Jabulani, Johannesburg, the event took a hybrid format, being recorded for TV and with 100 guests in attendance.

Having not worked on a large-scale production since the start of the pandemic, the experience was a mixed bag of adrenalin and nostalgia. “I was scared but excited,” commented Rawjee. “It has been a while! But I have a good team of guys who always step up and make my craziness happen. This really was a milestone for us.”

The equipment used on Miss Soweto over the past four years has grown from two 6,000-lumen projectors to now include over 200 LED panels. “While we are the main technical supplier, we sub hire from Bass Mechanics and ShowQuip, which is my way of spreading the love, and we are also responsible for the set design, content and the running of the show,” Rawjee explained.

Having only recently purchased the Robe ESPIRITEs, this was their first outing – “They were not stage shy!” Rawjee exclaimed. “They did an amazing job and added so much to the production, even cutting through the LED panels. We didn’t get to use them to their full potential, but lighting designer, Shaniel Lallao was as impressed as I was.”

Another integral piece of kit to the production was the Green Hippo Karst media server. “Thanks to Mfundo Masikane who ran the AV, and Dylan Jones from DWR Distribution, we were able to use the machine to its full potential,” said Rawjee said. Jones added: “This was not a simple setup, with all the LED screens, left, centre and right, making a single canvas. Vimal had an interesting approach to making a panoramic background for the event. Each part of the show had a different look. The idea really worked well.”

Working at The Soweto Theatre was very different from former years, with all safety precautions in place due to the pandemic. “I have to commend Lebugang Mnisi, the theatre’s Technical Manager, who was so helpful and full of vigour with his ‘get it done’ attitude,” said Rawjee. With some of the theatre’s crew self-isolating, the Soweto Theatre called on the Roodepoort Theatre’s Melony Eksteen and Ntombikayise Tshabalala to assist. “I would have these two individuals at my side at any show – they were so helpful, enthusiastic and just made my setup that much easier.”

The entire team put in extra effort, pleased to be able to work. “Shaniel was super enthusiastic to be behind a desk again, while the Bass Mechanic supplied an LED screen. Crewsaders Event Crew really pushed hard, and within five hours we were loaded out.” Rawjee also thanked Ramesh Singh and Darlington Kwanda, “who worked extremely hard to make the set and technical come together”, as well as the entire DWR Distribution team.

Reflecting on the event, Rawjee concluded: “Sometimes we have to juggle between clients and budgets, our crews and suppliers. Do what is best for your people and make sure they have enough to live decent lives. While it’s great to put on these shows, my reward is knowing that I helped so many others survive another month and that is what makes me proud to be Insane.”