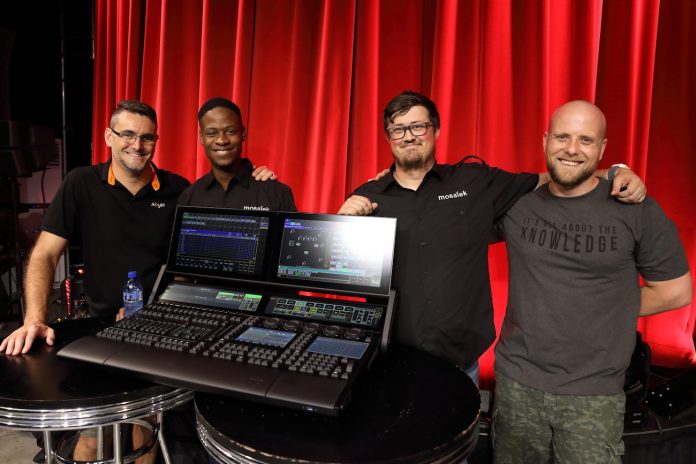 For the Mosaïek Church and Theatre in Fairland, life is all about sowing and reaping, with a heart reaching out to the community. It, therefore, came as no surprise that when the church invested in the very first grandMA3 console in South Africa, they had a bigger plan in mind.

Estian Els, head of Technical at Mosaïek Theatre, works closely with colleague Mduduzi Msibi. While the pair may be audio technicians, first and foremost, they provide technical support in every ministry of the church, including lighting, audio, LED screens and AV.

Every sermon is broadcast on KykNET where there is a remarkable viewership between 75 000 and 80 000 each Sunday.

The theatre is not only used for church events but is hired out as a venue with some headline productions under the belt including Idols and the upcoming The Voice finale. The income generated is then planted back into various outreach programs hosted by the church.

“The biggest fulfilment is being part of working in the changing lives,” said Mduduzi. “You are an instrument in God’s hands in bringing the ministry to life.”

The church, initially running off a PC based lighting console, decided on a grandMA3. “When we started the upgrade process we looked at all the available options on the market the MA definitely stood out as the market leader in lighting control,” Estian explained. “That made it the obvious choice as we push to be a world-class venue and the fact that MA appears as the number one requested lighting console on all international riders.”

A couple of years ago, Mosaïek had a dream to be energy efficient. “To give you some background, the entire theatre is run on solar power; we have a UPS system in the background and we also have a generator, so the solar powers our batteries which in turn constantly powers the theatre,” said Estian. “This meant we had to change to LED lighting fixtures.”

Ten years ago, the theatre ran on a PC based software control system and then reached a point where they had to finalize an upgrade. “We constantly have productions in the theatre, and repeatedly grandMA consoles are hired in to run the shows. We started looking at consoles, thinking of a dot2 XL-F or possibly a dot2 onPC. Then we went back to our roots to see what we were trying to achieve. We knew the grandMA3 was the best, it would meet technical riders, and as a result, is already booked out to go on the Voice for eight weeks, to be operated by Joshua Cutts and Andre Siebrits.”

The grandMA3 has been set up over ArtNet, running into the controller. Fiber runs all the way down to the stage where it breaks out into nodes which are all run through DMXking ArtNet.

“It’s quite easy especially now as we don’t have to physically run DMX lines to the back,” commented Mduduzi. “The upgrade from PC bases has simplified the workflow. Now it’s more about getting to know the technicalities and how to operate in depth.”

The feel and quality of the console has been met with approval, and the team appreciate the great thought and design elements that have gone into the grandMA3.

Estian and Mduduzi have also enrolled on the MA e-learning platform. “It’s phenomenal,” said Estian. “I’m considering going for extensive training on the console because I’ve found a love for it and the online course has helped so much. A big shout out also goes to DWR’s Duncan Riley, Jannie de Jager, Bruce Riley and Robert Izzett. They have really made the experience amazing and the customer support has been really good.”