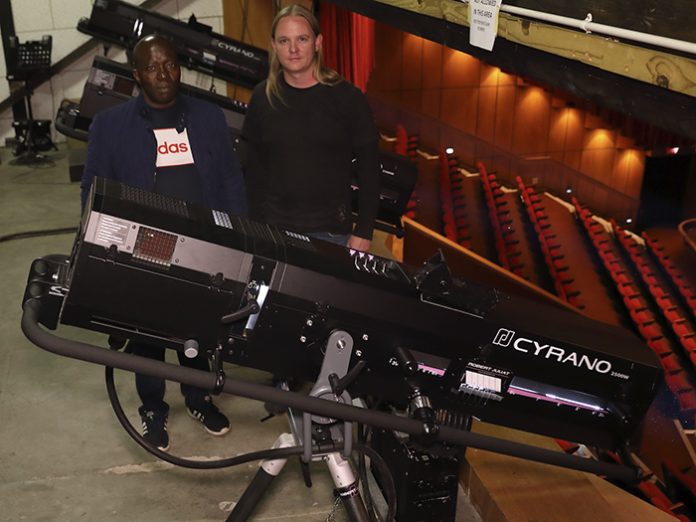 The longstanding technical crew of South Africa’s Joburg Theatre, headed by Enos Ramoroko, were jubilant to receive new equipment to complement their very busy and well looked-after theatre situated on Braamfontein Hill, Johannesburg. Part of the delivery from Robert Juliat’s exclusive distributor for South Africa, DWR Distribution, was four Robert Juliat Cyrano 2500W HMI followspots which have been installed for use in the 1000+ seat Mandela Theatre.

The complex’s largest auditorium, The Nelson Mandela Theatre, regularly sees over 75% of capacity audiences and remains open a minimum of fifty weeks in each year. In the past decade, it has hosted many hit shows, including William Kentridge’s acclaimed interpretation of Mozart’s The Magic Flute, the West End and Broadway musicals West Side Story, Chicago, The Color Purple and Spamalot and top-of-the-line global touring shows, such as Le Grand Cirque, Lord of the Dance and Brazouka.

Joburg Theatre is also the permanent home to Joburg Ballet, Jill Girard and Keith Smith’s Peoples Theatre Company, and one of the country’s most respected community development projects in the arts, the tiny ‘black-box’ theatre known as space.com. Its varied and loaded schedule also includes Joburg Theatre’s season of annual pantomime productions which have become the most popular highlight of South Africa’s theatrical calendar.

It was evident therefore that any replacement equipment needed to be of the best quality and durability to cope with the wide variety of purposes and heavy-duty use it would endure for many years to come.

“The Mandela Theatre’s followspots, which have probably stood the test of time for around thirty years, have been replaced by four Robert Juliat Cyranos,” said Kevin Stannett from DWR. The narrow beam angle of the Cyrano makes it perfect for really long throw distances found in larger theatres while its glass progressive frost filter and dark blue dichroic filter give a range of subtle design possibilities. Its unique dimmer shutter gives Cyrano a superb dimming ability.

“We are very happy for Enos and his team, who have always been amazing to work with,” said Stannett. “I think Johan Tshiwo who handles all maintenance at the theatre, will be pleased to have fewer repairs on his hands!”

The recommendation and installation came from DWR Distribution whose experience and in-depth knowledge of the products it represents are second to none, and the Joburg Theatre team were very happy with the service they received. “I’d like to thank the DWR family for their support,” confirmed Ramoroko.